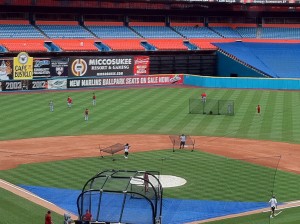 The original Cars is in fact the only Pixar film which I have never seen. As we all know, Pixar movies resonate with adults just as much as kids. In fact, I’d be willing to bet that nearly half of Pixar’s entire feature film library – Up and Wall E to name a few – were explicitly made for adults. Which is probably why these movies makes so much money. Parents are just as excited to see the movie as their kids.

Yet somehow, Cars has eluded me, like my white whale. Maybe my son will grow to be a huge NASCAR fan and we will develop a mutual love and respect for the original imovie. For now at least, I know very little about the premise of the first Cars other than it was Paul Newman’s last major role before his death in 2008.

:25 – Larry the Cable Guy is back! Has he done anything significant since the first Cars? Does he still do the “you know you’re a redneck when” bit or I am thinking of Jeff Foxworthy?

:52 – My absolute favorite part of previews for animated movies, trying to guess the voices. The Italian sports car sure does sound an awful lot like either John Turturro or Luciano Pavarotti.

:58 – No guessing on this one. That is the unmistakable voice of Michael Caine clearly on loan from the set of the latest Batman film. Wouldn’t it be awesome if movies worked liked professional soccer where actors could be loaned out by bigger films to smaller projects for a fee. Speaking of The Dark Knight Rises, when can we expect a preview?

1:01 – Sarah Ferguson Duchess of York? Can someone please explain to me why she is still making the morning show rounds? I swear she has been on the Today show at least 3 times a week for the past 20 years. (Note: I don’t really think this character is voiced by Fergie. At least I don’t after my wife corrected me.)

1:13 – Well this has become totally unrealistic. Brent Mustberger doesn’t have the time to announce a grand prix race. Not with the Little League World Series on the horizon.

1:36 – Who’s the main star of this film: Owen Wilson or Larry the Cable Guy? Judging from this preview it seems as if LtCG is the main draw. But why? I thought attendance at NASCAR events was way down this year.

1:52 – I can’t believe we’re nearly two minutes into a Cars preview and “Life is a Highway” by Rascal Flatts has yet to be prominently featured. This has to be a first. I hope somewhere Tom Cochrane is smiling.

Lightning McQueen is a world famous racing car about to take on the best of the best in the biggest grand prix race of the year. It is soon revealed that McQueen is being targeted by an evil international consortium. Michael Cain and Sarah Ferguson believe Larry the Cable Guy is behind the plan to sabotage the big race. Owen Wilson and LtCG have a melodramatic falling out before the big race. Eventually, Larry the Cable Guy is absolved of any wrong doing and returns to save the day, and race, for his good old friend Owen Wilson. Lightning McQueen wins the race, falls for the Duchess of York, and LtCG becomes an honorary member of the British Secret Service.

Cars 2 as it relates to a Major Sports Story

I’ll go with Jack McKeon returning to manage the Florida Marlins at the ripe old age of 80. His first order of business, bench Hanley Ramirez for being late. I love old people, they just don’t care what anyone else thinks. How, you ask, does this all relate to the Cars 2 preview? Easy, Larry the Cable Guy was forced out of Lightning McQueen’s inner circle much like Marlins owner Jeffrey Loria forced McKeon to retire as manager in 2005. Now, as the big race approaches, both McQueen and Loria have regained their senses and rehired their most trusted confidants.