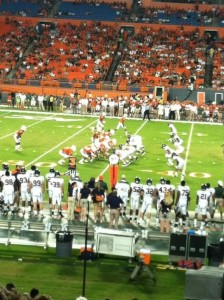 Indianapolis (+8.5) over TENNESSEE – It’s fun to try and think about what the spread of each Colts game this season would have been if Peyton Manning were healthy and playing. Take for example this matchup against the Titans. With Manning, I say the line goes to Colts (-6.5). Also, to whomever suggested this past week that Manning deserves a few MVP votes…you sir are a pot stirring nincompoop.

Jacksonville (+9.5) over Houston – The potential return of Andre Johnson means two things: 1) Texans tease the cover and win game 21-13 and 2) my fantasy team gets back on track after nearly three full weeks of mediocrity. How does the old saying go? You can’t make chicken salad out of chicken____?

CAROLINA (-3.5) over Minnesota – For some strange reason this matchup between two teams who are a combined 3-11 is one of the more appealing of all the 1pm starts. Probably has something to do with the two rookie quarterbacks, Cam Newton and Christian Ponder. I won’t be as excited if this game some how ends up involving Donovan McNabb.

New Orleans (-13.5) over ST. LOUIS – How exactly is a high ankle sprain any different from a regular ankle sprain? Is there such a thing as a low ankle sprain? In high school, I can remember rolling my ankle at least once a varsity basketball game. Today, my ligaments are so stretched out that I sprain an ankle climbing the stairs.

BALTIMORE (-13) over Arizona – What the heck happened last Monday night? Maurice Jones-Drew fumbled the ball four times and the Jaguars STILL managed to beat the Ravens. Is it all on QB Joe Flacco? It certainly seems like a lot of Baltimore fans are piling on the Delaware grad right now. I say give him a break. After all, it wasn’t too long ago that he was still living in his parents basement driving a beat up old Ford Taurus wagon.

NY GIANTS (-10) over Miami – It would be so like the Giants to play down to their competition here. However, since these are the dysfunctional Dolphins, there’s a better chance of Tony Sparano getting fired during halftime than of Miami actually winning this game.

BUFFALO (-6) over Washington – Since Buffalo is allowed to play one game a year in Toronto, then I think it’s only fair for teams like Seattle and Minnesota to schedule a “home” game in Canada as well. Imagine how crazy Edmonton would go for Vikings/Cardinals.

Detroit (-3) over DENVER – I never really got into the whole planking thing. I always thought it was a little unsanitary to lay across the jewelry display at your local Macy’s. But I’ll tell you, this tebowing thing has some real potential.

New England (-3) over PITTSBURGH – At what point Sunday do you think we will be able to tell who Jim Nantz is pulling for? I say second quarter after Simms drops the 8th “Ben” of the day.

SAN FRANCISCO (-8.5) over Cleveland – The Browns are like gambling kryptonite. Doesn’t matter who you take in this game it will most certainly come back to haunt you. Speaking of haunting, really looking froward to my first Halloween as a father. Of course, my son is much to young to enjoy candy himself which means….more Take 5’s for me!!!!!

SEATTLE (+3) over Cincinnati – I hope the Seahawks are the next team to go back to their “old school” uniforms. It would bring back such fond memories of Dave Krieg and Steve Largent.

Dallas (+3.5) over PHILADELPHIA – I watched a few minutes of the Chuck Wepner documentary on ESPN and one thing was made abundantly clear; the Bayonne County Park is just not the same thing as the Philadelphia Art Museum.

San Diego (-3.5) over KANSAS CITY – I for one am a huge proponent of the playoff, or in the case of Chiefs head coach Todd Haley, winning streak beard. It’s a proven fact that unkempt facial hair is good for at least one or two victories a season.