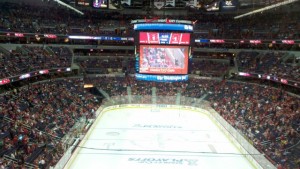 The urgency. The energy. The lack of commercials. I love playoff hockey!!! For two months a year we are treated to some of the most reliably competitive and unpredictable moments in sports. The NHL playoffs rarely disappoint and casual fans like myself can be just as caught up in the action as a hockey diehard from Moosejaw, Saskatchewan. Because the regular season does not stimulate the same sort of national interest as say football or baseball you have a lot of fans who are just now wading into the sport for the first time all year. It is therefore extremely important that the entire television audience is afforded some sort of cheat sheet to help better understand some of the hockey lingo used during a NHL playoff broadcast. Here is a running recap of last nights Boston Bruins/Washington Capitals Game 4 using some of the language overheard on the Verizon Center ice.

Zamboni: An ice resurfacer used before the game and during the intermissions to create the smoothest playing surface possible OR what I could have used after my 1 year old son urinated on our living room coffee table causing me to miss the first 10 minutes of action. But I’m ready to go now with the Caps taking an early 1-0 lead. Surprised to see Alex Ovechkin fashioning the tinted visor courtesy of LaDainian Tomlinson. I wonder if Ovi is going to struggle in the clutch like was the rap on Tomlinson back during his prime with the Chargers. “You’re the worst cornerback in the league Hobbs!!!!!”

Five Hole: The space between a goalie’s legs OR what was just utilized by Bruins right winger Rich Peverly on his 1st period goal. The score is now tied at 1 heading into the 2nd period. On a sperate notes, this Boston roster has to lead the NHL in non-traditional player numbers. 37, 46, 49, 63. It’s like the entire team is comprised of NFL long snappers.

Standing On His Head: When a goalie stacks their pads and does everything physically possible to prevent a goal OR what Caps net minder Braden Holtby is currently doing to stop this latest Boston barrage. Halfway through the 2nd period and the Bruins are out shooting the Capitals 26-8. I’m not 100% positive but I’m pretty sure Pierre McGuire just compared the rookie Holtby to Montreal Canandiens great Ken Dryden. Whoa, let’s pump the breaks a little bit here Pierre. I’m no Don Cherry but the comparison strikes me as a little premature sort of like saying Penny Hardaway is the next Michael Jordan or the rock band Oasis is bigger than God.

Wrister Top Shelf: A shot using mainly the wrists directed towards the top half of the goal OR what Capitals forward Alexander Semin used on the power play to put the Caps up 2-1 with little over a left in the 2nd period. I think it would be great if other sports adopted the power play system. Think about how much fun a NBA game would be if instead of a player fouling out when they picked up their 6th foul they now had to go and stand on the sidelines for 2 minutes while their team plays 4 against 5. Knowing Simmons’ affinity for Hoosiers and coach Norman Dale I would not be shocked if The Book Of Basketball contains an entire chapter on this subject.

Snow the Goalie: An offensive player kicking ice up into the face of an opposing goalie OR what the Bruins need to do more of during the 3rd period in order to crack the Holtby Code. 2-1 Caps heading into the 2nd intermission. Only 20 minutes standing between me and the 4th quarter of Bulls/Heat on TNT. Just kidding. Also, is it just me or could nearly every hockey expression double as some sort of filthy sex move? I’m now petrified to look up the term “icing” on Urban Dictionary.

Grinders: Hockey players known for their hard work and checking OR the playing style both teams are exhibiting during this 3rd period. The Caps have fallen back into a prevent defense while the B’s just cannot put the puck past Braden Holtby. With six minutes remaining in the 3rd, Boston is outshooting Washington 45-21 yet still trails 2-1. Just an unbelievable performance by Holtby. Notice also that Washington coach Dale Hunter has kept Alexander Ovechkin on the bench for much of the final period. Questioning his commitment to two way hockey?

Pest: An animal which is detrimental to humans or human concerns OR Brad Marchand

Empty Net: When a team pulls their goalie off the ice giving themselves a man advantage OR what the Bruins did with one minute remaining in the 3rd period only to come up short in the end losing by a final score of 2-1. Washington evens the series at 2 as the scene now shifts back to Boston for the all important game 5 Saturday afternoon. My three stars for game 4 go to Braden Holtby, Pierre McGuire’s bald head, and Alexander Semin’s wrists. Very entertaining conclusion to a somewhat choppy playoff hockey game. Maybe I’ll try this again Saturday night during Game 5 of the Rangers/Senators series. Lord knows there’s a lot of hockey language yet to explore.

view from the Verizon Center courtesy of @JLevin28