CHICAGO, November 15 – While most NFL players and personnel have chosen to remain silent since the presidential election, Chicago Bears quarterback Jay Cutler is proud to have cast a ballot for Donald Trump. In related news, this past weekend Cutler was also able to confirm that he is not good at playing football.

His enthusiasm for Mr. Trump was on full display in the Bears’ 36-10 defeat to the Tampa Bay Buccaneers as the normally dour and unexpressive signal caller appeared downright demonstrative and effusive while completing 16 of 30 passes for 182 yard and two interceptions.

His attitude caught many teammates off guard as they have long grown accustomed to Cutler appearing as if he does not ‘give a shit’.

The loss drops the hapless Bears to 2-7 on the year and while Cutler’s reign in Chicago will most likely come to a merciful conclusion at the end of the regular season, it’s not all bad news for the Santa Claus, Indiana native as President-Elect Trump remains so impressed by the Smokin’ Jay Cutler meme that he promised to consider Cutler for an opening with the surgeon general.

In this special edition focusing on concussions and football, Dr. Erik Swartz, a kinesiology professor at the University of New Hampshire, discusses his work on helmetless tackling training while former NFL player and author Nate Jackson talks about the inherent violence of football.

David Agranoff, vice president of Save Our Bolts, talks about the efforts to keep the Chargers in San Diego. 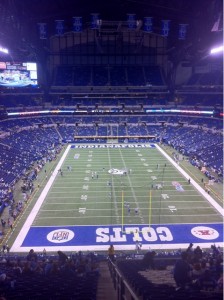 Last night, Philip Rivers looked like a better quarterback than Peyton Manning. During the Colts 36-14 loss at home to the Chargers, Manning looked old and injured.  Rivers orchestrated his offense with ease and was hailed as a “great, inspirational leader” by both Al Michaels and Chris Collinsworth. Personally, I have never been a huge fan of either Manning or Rivers, mostly because they have been two of the Patriots, and Tom Brady’s, main adversaries during the past decade. So, it makes no real difference to me that Manning looked past his prime last night while Rivers continues his quiet ascension to the upper echelon of NFL QBs.

Enough is enough. On to the week 13 power poll!

5. Pittsburgh Steelers (8-3): My heart is still breaking for Buffalo. Also, my new personal grooming philosophy is to grow facial hair like Ryan Fitzpatrick.

6. New Orleans Saints (8-3): People aren’t talking enough about Malcolm Jenkins and his amazing strip of Roy Williams during the Thanksgiving game vs the Cowboys. That play kept the Saints alive for the top seed in the NFC.

7. San Diego Chargers (6-5): Mike Tolbert is built like a rubix cube.  He also won me my weekly fantasy matchup.

8. Chicago Bears (8-3): You know how people always say that the tv adds 10 pounds. Well, in the case of Jay Cutler, the tv makes him look at least 45% more unlikeable what with all the poor body language and dismissive gestures.

10. Philadelphia Eagles (7-4): I hope Soldier Field never gets rid of the grass but man, that field did not look easy to play on Sunday.