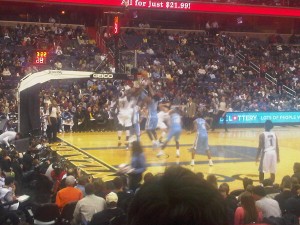 The Washington Wizards have yet to win a road game all season.  They haven’t fared much better at the Verizon Center either.  Last nights 120-109 loss to the Denver Nuggets lowered the Wizards record to a anemic 13-31. The lower level of the arena did not approach full capacity which was likely because a majority of bureaucrats and lobbyists were busy listening to President Obama deliver his latest State of the Union address.

The big story heading into last night’s SOTU was that, in an apparent display of bipartisanship and unity, house Democrats and Republicans would be sitting next to one another during the address.  When executed, this plan produced some of the oddest couples since Felix and Oscar.  Chuck Shumer and Tom Coburn. Kirsten Gillibrand and John Thune. John Kerry and John McCain. The comedy gods blessed us with an unparalleled amount of opportunities to poke fun of our bureaucratic transparency.

What if this happened in sports?  What if opposing teams and players decided that in an effort to promote greater civility and respect they would set aside their competitive integrity and extend the metaphorical olive branch. Picture this: baseball players inhabiting the same dugout. Or football players on the same sideline. And what about golfers sharing the same caddy. As Peter Venkman once said: “Cats and dogs. Living together. Mass hysteria!!”

To be honest with you, I don’t normally think much of anything a President may say during the SOTU.  Actual political policy is rarely determined by anything mentioned during this traditional address. Even still, I found myself watching last night mostly for the off chance that Joe Biden did something outrageous like say, fall asleep.

view of the Verizon Center courtesy of @just_jess_jess