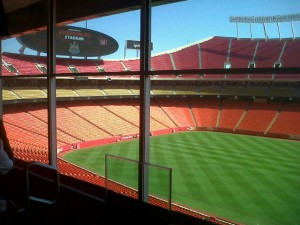 If my twitter feed is correct, and Chris Mortensen is not intentionally misleading us all, then the NFL lockout is going to end on either Thursday or Friday. After roughly 131 days of modest suffering, a lot of us football fans have been able to dedicate much more space in our brains to other important pursuits. What follows is a quick list of 32 things, 32 being the # of NFL teams, we here at VMS learned while doing everything humanly possible to not look, listen, or touch anything having to do with either Roger Goodell or DeMaurice Smith.

#1 – how to properly restring a weed wacker.

#2 – that Rosie Larsen may or may not have been murdered.

#3 – and that we really don’t care anymore because we’re never ever ever going to watch another episode of The Killing on AMC.

#4 – to not just blindly trust the quality of a new show because it airs on the same network as Mad Men, Breaking Bad, and The Living Dead.

#6 – which in that case, check out Game of Thrones. Think Lord of the Rings with fewer hobbits and much more sex.

#7 – speaking of a royal family, we learned that Philippa is about to become a very popular name for newborn girls worldwide.

#8 – bridesmaids can wear white and wear it very well.

#9 – on the subject of politics, President Obama was in fact born in this country.

#10 – ignorance should not be construed as patriotism.

#11 – and if you are going to accuse somebody of something so potentially destructive you better have your facts straight.

#12 – Donald Trump never had any real intention of running for political office. POTUS doesn’t make as much money as The Apprentice.

#13 – since money makes the world go round, maybe Rupert Murdoch will give back portions of his billion dollar empire to the victims of this phone hacking scandal.

#14 – of course if his wife Wendi is reading this column we apologize for any and all slander directed towards her husband.

#16 – and we are also starting to wonder if Mrs. Murdoch did in fact have something to do with the killing of Osama Bin Laden.

#17 – about Bin Laden, we learned that the ONLY thing he had in common w/ Americans was an intense love pornography.

#18 – speaking of pornography, we learned that Anthony Weiner is currently unemployed.

#19 – thanks to the former Congressman, we also learned to stop tweeting nude photos to our followers.

#21 – staying in Washington for a second, the term “debt ceiling” has been forced into our everyday vernacular along with planking, google +, and Casey Anthony.

#22 – after the financial collapse of 2008 we should probably start to scrutinize how ratings agencies like S&P and Moody’s differentiate between good and bad debt.

#23 – but however you look at it, we learned that our economy has run out of zero’s.

#24 – and lawmakers ought to quit worrying about their August vacations and do what they were elected to do which is make tough decisions.

#25 – getting back to Casey Anthony, we learned that we were the very last people on this planet to hear about her trial in Florida.

#26 – yet that didn’t stop us from being completely baffled by the verdict.

#27 – but apparently not as baffled as our wives.

#28 – yet somehow, amazingly, everything always goes back to Kim Kardashian.

#29 – Kris Humphries is a nice basketball player and all, but when it comes to this union, he doesn’t stand a chance.

#30 – while on the subject, be prepared for no basketball next season.

#31 – and no, we will not being doing a similar column for the NBA lockout.

#32 – because finally, we learned that these gimmicks take a lot longer to create than previously anticipated.

view from an empty Arrowhead Stadium courtesy of @RobScanlon_nufc