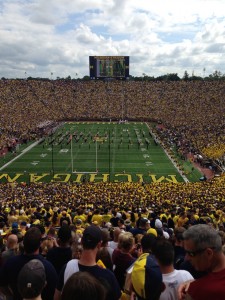 We came to remember a friend, a friend who had left us all much too soon. That’s what brought us all to The Big House. Of course when you arrive in Ann Arbor you realize that it isn’t even a house at all but rather a football stadium, but not just any kind of football stadium but a football stadium steeped in tradition and memories, memories of a glorious past full of Big Ten championships and Heisman Trophy winners. Few of us had any direct affiliation to the school or the stadium but none of that mattered, not on this Saturday. We came to remember a friend.

We came to remember a friend, a friend who had already sent in his undergrad deposit to the University of Illinois before realizing at the very last moment that he already bled Maize and Blue. These two colors run deep throughout this college town, creating avenues and arteries full of semi coherent stories that may or may not be complete fabrications of a time long ago. Rather than expose and vilify these novice hucksters for misrepresenting their youth, we accepted these tales out of respect for our friend. A friend whose favorite establishment is this place that specializes in homemade cheese pizza and large mason jars of sangria, the combination of which may lead to diabetic shock. The ice helped, at least enough to ward of the onset of a premature hangover. No complaints, the conversations were appreciated and the tributes tender and glowing. We came to remember a friend.

We came to remember a friend, a friend whose social calendar revolved around football games and the fraternity. His brothers were back in town, leading the charge past a row of social houses surrounded by swarms of scantily clad frosh all looking to be recognized on this the first weekend of the school year. We were much too old and haggard to slow down and mingle, fueled by the devastating realization that our kids are now closer to college than we are. Better to surround ourselves with grad students, who in this town, all seem to mingle in the downstairs of a dimly lit pub where the water pipes are exposed and hang just low enough to engage in a few feats of strength. This was another of our friend’s favorite places although it’s tough to imagine him attempting any kind of calisthenics. Especially when surrounded by several taps worth of local brew. A perfect way to prepare yourself for the following morning’s festivities. The home opener. We came to remember a friend.

We came to remember a friend, a friend so benign that he was able to foster relationships with a wide array of Wolverine fans, including the very kind folks who hosted our tailgate. Breakfast turns to lunch and as we stood amidst a sea of blue and cornfields of maize one starts to wonder how in the world we’re going to pack all these people into a single space. For some, the libations will help grease the skids, serving as a conduit to release all inhibitions. People watching is at a premium. The students are going hard because they’re young and they only know one speed. Grads are here too with strollers in tote as they introduce a whole new generation to Saturday, a day reserved for BBQ and seven layer dip. Locals dominate the parking lots as well, welcomed as equals amongst the euphoria. The opponents from the middle of the state arrive but their maroon proves to be no match for the primary colored protagonists. A football is found and our warmup begins but is cut short by the hordes making their towards the gleaming gates. Time to follow. We came to remember a friend.

We came to remember a friend, a friend who would never miss a game. The stadium has already filled up by the time we made the ascent to our seats. Behind us, The Team The Team The Team prepares to run onto the field serenaded by the marching band. As we take our seats, we Hail the Victors, the first of many reverential salutes on this day. The air is humid and the space limited but that will not prevent the record setting crowd of over 112K from enjoying the onslaught as the Chips prove to be little match while the common fan’s eyes turn towards the following week under the lights against rival Notre Dame. We stay in our seats, partially because there is not enough space to move but also because we didn’t want to miss something. Like the marching band honoring 007 at halftime or the backups coming in and giving us all a glimpse of the near future.  Our friend never liked to leave these games early either, anything to prolong the long walk home. By the 3rd quarter, we really could have used the shade. But, we came to remember a friend.