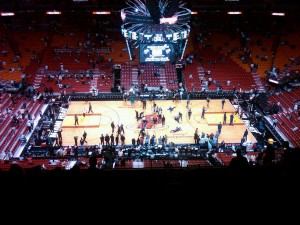 This photo was taken roughly 10 minutes prior to tipoff at American Airlines Arena before last night’s Miami Heat 123-96 victory over the Phoenix Suns. And where are all the people?  I can remember Miami having attendance issues last season, when they were a mediocre team at best, but this year?  With the three biggest off-season free agent acquisitions (Lebron James, Dwyane Wade, Chris Bosh) I figured Miami fans would be turning out early and often.  I watched parts of this game and can tell you that the arena did fill up eventually.  However, we are less than a month into the season and I figured fans would be a bit more present/vocal.

What accounts for the overall malaise in Miami? Part of the economic turndown or are fans, like the Heat players themselves, just waiting for the playoffs to give it their best?  Share your views.