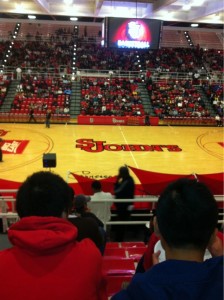 What an unbelievable weekend in sports!  Lincecum/Halladay, Yankees/Rangers Game 2, Badgers/Buckeyes, Arkansas/Auburn, and then a whole bunch of NFL games on Sunday.  With everything going on it is probably a surprise to many that the college basketball season began yesterday as many programs held their annual Midnight Madness festivities.  One such program was St. John’s, whose hiring of a new coach, Steve Lavin, has renewed optimism for fans of the Red Storm.  Can Coach Lavin keep the homegrown high school talent in the city and eventually have a shot at competing in the Big East?  One of many storylines heading into the 2010-2011 college basketball season.  For now, the MLB playoffs and football take center stage.  Enjoy the view!