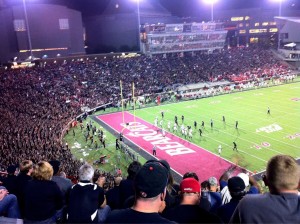 CINCINNATI (-2.5) over San Francisco: I have two lasting memories from Super Bowl XVI, 1) Tim Krumrie breaking his leg followed by the grotesque slow motion “spaghetti ankle” and 2) Joe Montana pointing out John Candy sitting at the 50 yard just as the 49ers were about to break the huddle on their Super Bowl clinching drive.

BUFFALO (+8.5) over New England: This Patriots secondary still gives me the willies. Also, I’m loving the whole “would Ryan Fitzpatrick be so popular if he hadn’t gone to Harvard” discussion. I feel like this is a Bob Bradley Op-ed in The Buffalo News just waiting to happen.

NEW ORLEANS (-4) over Houston: Two Gulf Coast cities forever linked by Hurricane Katrina. It seems like only yesterday that Saints owner Tom Benson was threatening to move the Saints to San Antonio. Now, there is no NFL team as synonymous with their city as the Saints and New Orleans. And speaking of Hurricane Katrina, what would Larry David do without Leon Black?

PHILADELPHIA (-7) over NY Giants: Giants had very little business beating the Rams last Monday night. Furthermore, how much longer will Eli Manning defenders use the whole “it gets really windy in the Meadowlands” excuse for why he can’t throw a 10 yard out pattern before the majority of New Yorkers forget all about Super Bowl XLII and wish the younger Manning would donate a few extra vertebrae to older brother Peyton?

CLEVELAND (-2.5) over Miami: If you combined these two teams they would have a really good shot at the playoffs.

Denver (+6.5) over TENNESSEE: If Tim Tebow stays at WR for the Broncos does it mean he is going to have to change his number from #16? If so, can all those fans who bought his jersey receive some sort of refund?

Detroit (-3.5) over MINNESOTA: I really should have stopped betting on Donovan McNabb 15 years ago when he was riding the pine for the Syracuse Orange basketball team backing up Jason Hart and Marius Janulis.

CAROLINA (-3.5) over Jacksonville: Things I learned from the Brooklyn Flea Market Part II. #1: Bison Jerky is just as good as Beef Jerky. #2: Everyone in Brooklyn dresses the exact same way. #3: Never drive home to Connecticut on a Sunday afternoon when the Hutchinson River Parkway is shut down to a single lane, you have a screaming 7 month old in the backseat, and the only football option on the radio is the second half of Jets/Jaguars.

SAN DIEGO (-14.5) over Kansas City: At least Kansas City has the Royals.

OAKLAND (+3.5) over NY Jets: Upset Special!!! Upset Special!!! And speaking of Oakland, did you hear Moneyball is coming out this weekend and that Brad Pitt may or may not still hate Jennifer Aniston? According to Will Leitch at Yahoo Projector, the more you like baseball the less you’ll like this movie.

TAMPA BAY (-1.5) over Atlanta: Pewter is not sympathetic to sweat. The Bucs tend to look like PGA golfer Tim Herron after a mid July round at Congressional.

SEATTLE (+3.5) over Arizona: With the release of Pearl Jam Twenty, a documentary directed by Cameron Crowe and dedicated to one of the most iconic, influential American rock and roll bands of the last quarter century, here’s a list of my five favorite PJ songs.

5) State of Love and Trust: So complex and yet so elemental. The title alone forces you to conjure the corner of a busy emotional intersection.

4) Just Breathe: What? Guys can like this song too!

3) Elderly Women Behind the Counter in A Small Town: “Memories like fingerprints are slowly raising.”

2) Corduroy: Brings me back to the days when I was driving home from high school basketball practice and the only CD’s in my Case Logic were Vitalogy and my dad’s copy of Des’ree I Ain’t Movin.

1) Rearviewmirror: This one always makes me want to drive about 20 miles over the speed limit. Plus, when played live, the commotion/hysteria that builds throughout the crowd is usually enough to blow the whole damn roof off of the building.

CHICAGO (+3.5) over Green Bay: Jay Glazer is erratic, like “can’t trust him behind the wheel of a car” kind of twitchy. During his Real Sports interview with Bryant Gumbel, Glazer was never an arms length away from his two cell phones and a bottle of 5 Hour Energy. At least now we know how Clay Matthews became the dominant pass rusher in the NFL. All it took was a combination of MMA training and bronzing powder.

Pittsburgh (-10.5) over Indianapolis: Speaking of Glazer, this Peyton Manning/European stem cell story is not receiving nearly enough attention. For starters, doesn’t it seem fairly ridiculous that Manning would have to travel across the Atlantic Ocean to receive this kind of advanced medical treatment? Shouldn’t this issue have been raised last night at the GOP debate in Orlando? Can we at least blame Chris Wallace for the oversight?

WASHINGTON (+5.5) over Dallas: Is it ethical for a defensive player to target Tony Romo’s ribs, knowing full well that he is playing with a punctured lung. I for one can’t believe Romo is even considering taking the field with that kind of injury. If I had a punctured lung I wouldn’t be tying my own shoes let alone going to work.