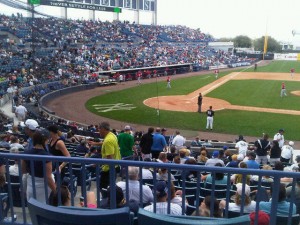 NFL Equivalent – Denver Broncos: Both teams are young, trying to piece together cohesive units as players grow into themselves. Both took chances on highly touted young prospects, QB Tim Tebow for the Broncos and P Stephen Strasburg for the Nationals.  Each of these precocious talents have messiah like followings due to prodigious amateur careers. Washington is trying hard to make moves to become contenders immediately, while Denver is hoping to reclaim past glory by hiring Bronco legend John Elway as their VP of football operations.

Google Search: Everyone expected Jayson Werth to land in the AL East with either the Yankees or Red Sox, but the Nationals pulled the trigger, throwing bills around like Alexander Ovechkin at a Russian McDonalds. Werth joins enigmatic speedster Nyjer Morgan in the outfield. Don’t be surprised if upstart phenom Bryce Harper, of SI fame, doesn’t get some at-bats in the big leagues later this summer. Perhaps the brightest spot on the team is the starting rotation, featuring returning starters Stephen Strasburg and the highly underrated Jordan Zimmerman, although Strasburg with begin the season in extended spring training while he recovers from Tommy John surgery.

Famous Movie Quote: Striker, listen, and you listen close: flying a plane is no different than riding a bicycle, just a lot harder to put baseball cards in the spokes. – Rex Kramer from Airplane!

I picked this quote from the 1980 Zucker Brothers classic Airplane! because the Nationals have the potential to avert total disaster this season and post a reasonable record. Hopefully they will approach the season with simplicity, avoiding the complications of media and distractions that many other teams face (like say, building mansions). Ryan Zimmerman, a quiet but focused player, may be the Striker to crash land their 2011 plane. Also, I am writing this blog post on a plane back to Boston from San Francisco, so perhaps I have flying on the brain. 2011 record: 74-88, 5th place NL East