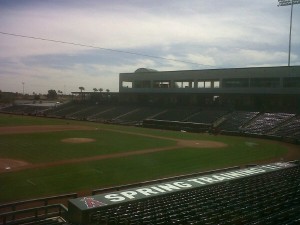 NFL Equivalent – Indianapolis Colts: What position would Peyton Manning play if he were a MLB star? My first instinct says starting pitcher because of the arm strength and physical stature, not to mention the preparation that goes into taking the mound every five games. Manning would however drive his catcher and pitching coach absolutely bonkers with the way he obsesses over scouting reports and opposing player tendencies. One potential issue for fans, with the way Peyton likes to run the play clock down we could very well be looking at a 4 hour baseball game every time he takes the mound. With his lethargic, meticulous pace Manning should probably play for the Yankees and become best friends with Derek Jeter.

Google Search: This was supposed be the winter where the Angels opened up their wallets and landed a slew of high priced free agents. They offered Carl Crawford big time money to return home to SoCal, but not as much as the Red Sox. They were willing to pay Cliff Lee as well but he chose a much more comfortable living situation in Philadelphia. These two failed attempts to land a high powered, impact player forced Angels management to trade for a has-been high powered, impact player in Vernon Wells.  Canada hasn’t been this relieved since their men’s curling team won Olympic gold in 2010.

Famous Movie Quote: I’m sorry, did I break your concentration? I didn’t mean to do that. Please, continue, you were saying something about best intentions. What’s the matter? Oh, you were finished! Well, allow me to retort. What does Marsellus Wallace look like? – Jules from Pulp Fiction

Where do cinema snobs rank Pulp Fiction in the pantheon of Quentin Tarantino films?  Personally, I would put it right behind Inglorious Basterds but well ahead of Jackie Brown. It is amazing to think about the careers which were resurrected/preserved by this film, most notably John Travolta and Bruce Willis. Without Pulp Fiction, Travolta would be working on Look Who’s Talking 8: That Bird Can Sing! while Willis would have just completed Hudson Hawk Drowns in the Hudson River. The Angels are hoping Vernon Wells enjoys a similar resurgence this season.  Even still, the Angels will have to fight hard not to become yesterday’s news. 2011 record: 84-78, 2nd in AL West