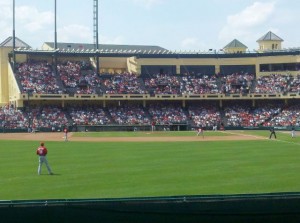 NFL Equivalent – Philadelphia Eagles: I think neither the Atlanta faithful or the Philly Phanatics will care much for this comparison, but it actually makes a lot of sense. Both teams have been very good in the past few years, always getting close to winning it all, but not quite getting the job done. The Braves and the Eagles have both done a fine job of blending veterans and young blood, always retooling without having to have a “rebuilding” period of failure. Both teams were also once known for staunch defenses and more recently are putting up gaudy offensive numbers with some real powerful offensive threats like WR DeSean Jackson and QB Mike Vick and the frightening OF Jason Heyward and now 2B Dan Uggla. By the way, Mike Vick can throw the ball really far and so can Alex Gonzalez.

Google Search: How underrated is Derek Lowe? The guy is starting another opening day, and a quick look at his numbers over the past few years shows you why. He’s pitched about 200 innings over the past three years, winning at least 14 games each year with an ERA around 4.00. Sure these numbers aren’t gaudy, but I can’t think of a team in the baseball that wouldn’t want a workhorse like that in the rotation.

Famous Movie Quote: I just dropped in to see how you boys was doing. Daniel Day Lewis from The Last of the Mohicans

Okay, this was a little cheap, I admit it. Braves. Native Americans. I know. But this is what I imagine new Braves manager Fredi Gonzalez saying while strolling into the Atlanta clubhouse for the first time since replacing the iconic Bobby Cox. Like, “I’m not sure I have anything to tell you guys, so hey, how is it going?” That said, I’m not so sure the Braves will need anyone to be a firm leader in the clubhouse. Chipper Jones is still around, as well as Derek Lowe and Tim Hudson. These guys are pretty strong clubhouse guys, and to be honest, do the Braves seem like they are interested in anything but getting business done? They are downright workmanlike in their approach. So sure, Fredi can saunter in every morning and just, see how the boys are doing. 2011 prediction, 87-75 2nd place NL East