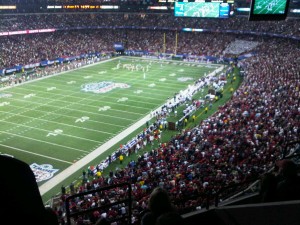 Fiesta Bowl: Connecticut vs. Oklahoma(-17)
January 1, 8:30 pm ET (ESPN)
“Analysis”: Hahahahahahaha! All of you purists screaming that UConn doesn’t belong in a BCS game can take your shoes off and kick rocks. Someone forgot to eliminate the Big East as an automatic qualifier, the planets aligned, the Huskies were able to find a wormhole in the matrix, and now they have the honor of playing The Sooners on New Year’s night. This one won’t be close.
VMS Pick: Oklahoma

Orange Bowl: Stanford(-3) vs. Virginia Tech
January 3, 8:30 pm ET (ESPN)
“Analysis”: Pure pocket passer, and likely top draft pick, Andrew Luck against the eely, rubber-armed Tyrod Taylor. This is also possibly Coach Harbaugh’s last game at Stanford. I can’t see the Hokies pulling this one off, but they do seem to come ready to bowl every year. Don’t bet on this game.
VMS Pick: Stanford

Sugar Bowl: Ohio State(-3.5) vs. Arkansas
January 4, 8:30 pm (ESPN)
“Analysis”: This is a BCS game, huh? Terrell Pryor is good, no matter what people say. Ryan Mallett is also pretty good. Most likely, he will grow up to be something close to Phil Rivers, who no one seems to like. Both of these teams are at-large BCS picks and have a bunch of offensive threats. Ohio State seems to have the edge in experience, but Arkansas had to play that tough SEC schedule.
VMS Pick: Ohio St.

GoDaddy.com Bowl: Middle Tennessee vs. Miami (Ohio)(-1)
January 6, 8 pm (ESPN)
“Analysis”: Why is this game being played on January 6? That seems disrespectful. Here’s the scoop, though: Ben Roethlisberger went to Miami, but got himself into some trouble in Murfreesboro, Tennessee, which happens to be the home of MTSU. Who’s responsible for this mathcup, Abe Zapruder.
VMS Pick: Miami (Ohio)

Stay tuned for Tis the Season for Bowling: National Championship edition. Until then, share your views.