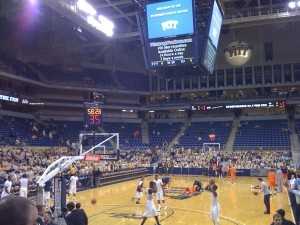 It took me forever to figure out why the Pitt student section went by the name “Oakland Zoo”. Granted, I could have figured it all out with a quick visit to “the google” but I must have wanted to make things harder for myself. Possible early guesses behind the name included: 1) Charles Oakland was a former player for the Panthers back in the early 1970’s. NOT TRUE. 2) University founders built the current campus over a prehistoric animal sanctuary. Also, NOT TRUE.  3) And this was a stretch, there is no true connection between the University of Pittsburgh and the name “Oakland Zoo”. You guessed it, NOT TRUE.

So, as it turns out, “Oakland” is a neighborhood in Pittsburgh where the university is located.  “Zoo” refers to the wild and crazy antics of the student body that has been pouring into the Petersen Events Center ever since the doors opened back in 2002.

One of my favorite parts about “The Pete” are the floor level luxury boxes that extend along the entire length of the court. Great idea that was probably modeled after Qwest Field in Seattle and perhaps has since gone on to serve as the inspiration behind similar designs in Cowboy Stadium and the New Meadowlands. It’s good for the upper class folk to mingle with us common people every now and again.

view of “The Pete” courtesy of @Chris_Gates