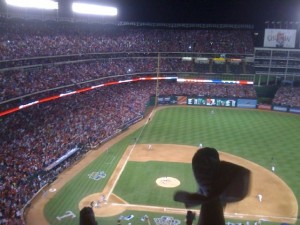 Never has a World Series cast such a polarizing shadow over an upcoming election.  Voters across the US will pour into the polls on Tuesday in what is shaping up as an enormously important referendum on the economic/cultural direction of this country.  Political pundits looking for a last minute poll or electoral formula need to look no further than the 2010 World Series.  The winner of this series could very well represent the current political mindset of the general electorate.

On the left, you have the San Francisco Giants.  The city of San Francisco has long been considered the liberal bastion of the United States. Progressively minded social/cultural reformers have been flocking to the Bay Area since the middle part of the 20th century.  A win for the Giants could spell success for the Democrats.

On the other side of the diamond you have the Texas Rangers.  The great state of Texas is the indisputable center of cultural conservatism.  The Lone Star state has long represented strong minded, freedom loving individuals.  Presidents Bush, 41 and 43, are frequent guests of Nolan Ryan in the owners box at the Ballpark in Arlington.  A win for the Rangers and maybe the Republicans take back both Houses of Congress.

Of course, there’s a good chance that a connection between the two does not exist.  However, if you catch yourself rooting for one team more than the other, you may want to take a closer look at your voter registration.