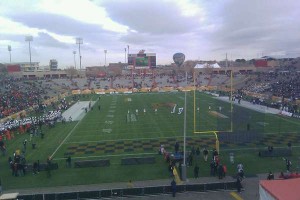 Beef ‘O’ Bradys’ St. Petersburg Bowl: Southern Mississippi vs. Louisville(-3)
December 21, 8pm ET (ESPN)
“Analysis”: “Beef ‘o’ Bradys’”? Really? Apparently, this is some sort of franchised Sports Bar & Grill(e). Southern Miss gave us one Brett [email protected]%^e, who may or may not be retiring at the end of the season. Louisville is the coaching home of Rick Pitino, who leads the Cardinals basketball team which is one of the preeminent programs in the Big East.  Not sure how this helps their football team.
Pick: Tie