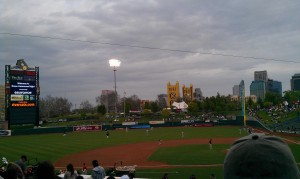 It’s tough not to feel for the good people of Sacramento. First the Maloofs fold their WNBA franchise, the Sacramento Monarchs, and now those crazy brothers are threatening to relocate their NBA team to Anaheim. Good, albeit time consuming, read by Bill Simmons on the current state of the Sacramento Kings ownership group. Spolier alert!!!! It’s not a good situation at all. Closer to the McCourt poor money management/divorce case than most realize.

Speaking of Kings and Queens, I was trying to think up an American equivalent to the Royal Wedding of Prince William and Kate Middleton. All I could come up with was a union of Taylor Swift and Tyler Perry or maybe Derek Jeter to Katy Perry. (No offense Russell Brand. But this is not easy, you try!) Bottomline, there probably is no Yank equal to the pomp and circumstance of Friday’s nuptials from Westminster Abbey which is sure to the be the most watched global event since this transcendent piece of jailhouse choreography.

*She’s out of his league by the way. I mean, by all accounts he is a wonderfully grounded, regular guy, who also happens to be the eventual heir to the British throne, but she is really, really attractive. I bet she is so attractive that your wife doesn’t like her a la Brooklyn Decker or Angelina Jolie. Go home and ask, I bet I’m right.

You may wondering: will I be watching at 4am when Prince William and soon to be Princess Kate walk down the aisle? The answer: absolutely! But here’s why, our 11 week old son is so nocturnally unpredictable that I’ll probably be up anyway. He’s getting to the point where he can sleep through the night, or at least come pretty close, but my wife and I are both convinced that he is making the conscious decision to deprive us of as much sleep as possible so that when we go to work on less than 4 hours of sleep we look and feel like extras from The Walking Dead. Therefore, I will be watching** the Royal Wedding starting at 4am because my son will be up anyway and Saturday, with its promise of afternoon nap time, is right around the corner which means I can survive the final day of the work week on espresso fumes and a few hours sleep.

**I caught my first taste of “Royal Fever” last night when I made the conscious decision to watch Piers Morgan Tonight on CNN. He was interviewing a whole slew of beaming Brits from Jane Seymour – Kitty Kat – to Princess Diana’s wedding gown designer who kind of resembled Cyndi Lauper. My takeaway: this wedding is a tremendous source of pride for British people. Prince William represents the lasting memory of his mother who is still universally revered for her charitable spirit. Whether or not we Americans get it is probably not the point. Although, judging from the amount of coverage this wedding is already receiving in the States, the moment is most likely unavoidable.