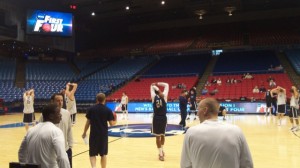 While most everyone else, including your boss and mother in law, is bickering over their brackets and comparing cinderellas, I decided to take a slightly different approach to March Madness. Rather than focus on any specific 7/10 matchup or share with you my gloriously irrelevant Final Four prediction, (Go Jackrabbits!!!!), I figured that what was most needed at this time was a closer examination of the second/third round host cities. Here are superlatives for each of the 8 locations, including Greensboro.

Best Scrabble Score: Albuquerque – It may not be “sesquioxidizing” but with 31 points the largest city in New Mexico is clearly the highest scoring scrabble word on the board. And there isn’t even a close second. Go ahead, do the math. Nashville (15) and Greensboro (12) don’t stand a chance. Maybe if a second/third round game were being played in Jacksonville (28) would you then have an argument. But in board game reality, none of this even matters because as anyone who plays scrabble knows you can’t play a word that starts with a capital letter which is always a bummer for me whenever I try to sneak “Xanadu” by my opponents.

Best Explorer as a Namesake: Columbus – The capital of Ohio wins by default and really only because there are no tournament games played in either Hudson, NY or Ponce de Leon, FL. One of my absolute favorite books to teach in my World History class is “1491” by Charles Mann which gives an in depth look at what American civilizations were like before European contact. Contrary to many of our textbooks, indigenous peoples were able to cultivate and sustain incredibly complex and technologically advanced societies. Of course, if like me you grew up watching Disney movies then the notion of the Native Americans as neither “noble savages” or “incurably vicious barbarians” comes as somewhat of a shock. Now that I have kids of my own I suppose this is what they call a teachable moment.

Best Beer for Under $2: Nashville – It’s impossible to not at least respect a place where a 16oz can of PBR costs you right around $1.50, including tax. The Music City has a pulse and vibe unlike any other city in the country. (Granted I have yet to visit New Orleans, Miami, Las Vegas, Los Angeles, Austin, or Seattle.) The only downside, the water mocassins. My grandmother was born and raised in Nashville and she use to tell us how when the Cumberland River would rise and flood the surrounding plains that it would leave behind dangerous cottonmouth water moccasins in people’s gazebos and living rooms. These stories always use to give me the willies and made me appreciate my idyllic upbringing in New England where the only menacing wildlife that I encountered was my neighbors rabid golden retriever named Molly.

Best City Where I Would Have Liked To Live If It Were 2008 Before Every Hipster Dufus From Williamsburg Brooklyn Hadn’t Already Moved There: Portland – I caught a few promos for the MLS opener Monday night between the Portland Timbers and the Philadelphia Union and walked away totally freaked out by the passion exhibited by soccer fans in the pacific northwest. For instance, were you aware that the Timbers unofficial mascot is some brawny guy named Timber Joey who after every Portland win fires up a large chainsaw and cuts a section off the “victory log”? Timber Joey and victory log: two things that I never thought I would mention in the same sentence.

Best City Where I Would Have Liked To Live If It Were 2009 Before Every Hipster Dufus From Williamsburg Brooklyn Hadn’t Already Moved There: Pittsburgh – I’ve expressed my preoccupation with the Steel City before, but it bears repeating, this town has everything young professionals are looking for including affordable housing. Andrew Carnegie would be so proud.

Best Billionaire: Omaha – Speaking of the Gospel of Wealth, Omaha remains the home of the oracle himself Warren Buffett, who for some odd reason I always get confused with Rupert Murdoch even though one believes that the richest 1% should pay more in taxes while the other owns News Corp, a company known for it’s conservative politics and illegal phone hacking. Perhaps it’s the glasses. Or the vaults full of money.

Best City To Mispronounce: Louisville – Or is it “Loo-ee-vil”? Let me just say that the outsiders way is much, much easier. My dad and I are constantly at odds over how to pronounce his hometown of Baltimore, MD. He prefers “Bawl-mer” while I favor the more prevalent, albeit incorrect, “Ball-ta-more”. The fact that we are even still having this argument just proves the theory that my dad has yet to fully recover after Barry Levinson failed to cast him as one of the leads in Diner. It’s funny, dad has always considered himself to be a lot like Boogie where I have always seen him as a taller version of Eddie.

Best City In North Carolina That Is Also A Site For a 2012 NCAA Tournament Game: Greensboro – Part of me wanted to give this category to Louisville too but that wasn’t going to work seeing as how Kentucky and North Carolina are two different states, even though both can boast a #1 seed in the NCAA tournament. And why is it that Greensboro always seems to be a host city? Probably has something to do with its close proximity to the Research Triangle and the rich basketball tradition along Tobacco Road. If that’s the case, why no love for Manchester, NH? 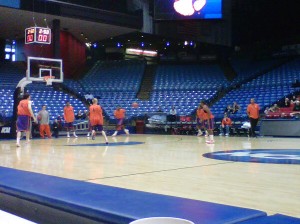