Pitching wins championships and both World Series teams, the Giants and Rangers, are pitching extremely well right now.  It will be interesting to see the starting pitching matchups for the series. Texas has a potent offensive and the chemistry edge must go to San Fran who really seems to be buying into this “cast of misfits” mantra.  My series prediction, Giants in 7. Series MVP: Brian Wilson. Views? 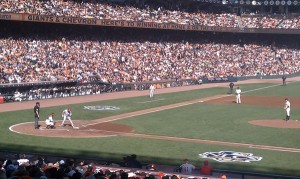 It may not be the best park in the MLB but baseball in San Francisco does provide fans with a picturesque backdrop.  Today’s NLCS game 3 was played on a perfect fall day in the Bay Area and Giants fans were treated to another fantastic pitching performance, this time around by Matt Cain who led SF to a 3-0 victory, and 2-1 series lead, against the Philadelphia Phillies.  So fans of baseball who have traveled to San Francisco, is the ballpark experience as good as it looks on TV?