Weather permitting the Baltimore Orioles and the Kansas City Royals will open the 2014 ALCS tonight at Camden Yards.

Here’s a sample of a few other moments from game 1. Weather permitting.

Fans will get their early for batting practice and Boog’s BBQ.

Somebody important, maybe a senator or reality tv star will throw out the first pitch.

The announcers, including Cal Ripken Jr., will make over 100 references to the 1985 and 1983 ALCSs, the last time the Royals and Orioles won the pennant respectively.

Tillman will end up walking Escobar on 8 pitches leading Orioles manager Buck Showalter to ponder when is too early to go to Andrew Miller, Darren O’Day and Zach Britton in the bullpen.

The next batter Nori Aoki will hit into a 6-4-3 double play and Showalter will instantly regret thinking about bringing in a relief pitcher even though we will never know or hear about his indecision because he is a baseball genius who never makes mistakes.

In between the top and bottom half of the 1st inning, Orioles shortstop J.J. Hardy will use some of that $40 million extension to buy everyone in the dugout a soft drink of their choosing.  END_OF_DOCUMENT_TOKEN_TO_BE_REPLACED

If at the the beginning of the 2014 MLB season you had the Baltimore Orioles and the Kansas City Royals in the ALCS then you’re lying. Either that or you should let it all ride in Vegas because you might be on the verge of a lucrative lucky streak.

We’d be more inclined to believe you if this were the 1980s and parachute pants ruled over skinny jeans. Back then the American League was aligned differently, the gap between markets large and small much less defined. Long are the days of Whitey Herzog and Earl Weaver. Believe it or not, this is the first time since 1997 that the ALCS hasn’t featured one of four teams: Boston Red Sox, New York Yankees, Detroit Tigers or Los Angeles Angels. Ironically, ’97 was the last time Baltimore played in the ALCS while Kansas City hasn’t made it this far since 1985.

The Orioles and Royals have many similarities and differences. Baltimore hits home runs while Kansas City steals bases. Both have lock down bullpens, young lineups, solid starting pitching and play above average defense. Each team is built to win now. Next season the Orioles may be without Nelson Cruz, Nick Markakis and JJ Hardy while the Royals will in all likelihood lose staff ace James Shields. Buck Showalter traditionally manages laps around Ned Yost but the Royals have belief especially since their Wild Card comeback against the Oakland A’s.

Home field advantage is a real, palpable thing especially for crowds unaccustomed to October baseball. You won’t find many fans in either Camden Yards or Kauffman Stadium who have been spoiled by success. BBQ and crab cakes aren’t the only reason to root root for the home team and for two cities where the NFL has been king, this ALCS will be a refreshing reminder of the once proud yet too often overlooked tradition of both franchises.

Non partisan baseball fans will enjoy watching Baltimore/Kansas City because of the nostalgia while fringe fans will appreciate the novelty of this once in a generation ALCS. If not, there’s always football.

The Kansas City Royals beat the Oakland A’s in spite of manager Ned Yost. This seems to be the prevailing logic the morning after a wild American League Wild Card game that went to extra innings and took 5 hours to complete. Yost is being ridiculed for a couple of curious choices most notably his decision in the top of the 6th to replace starting pitcher James Shields with rookie Yordano Ventura. With two on and nobody out, Ventura fell behind the first batter he faced Brandon Moss 2-0 before serving up a belt high fastball which Moss deposited over the center field fence for his second home run of the game putting the A’s up 5-3. Ventura would exit after recording just a single out and the A’s would tack on 2 more runs in the inning.

Kansas City would comeback to even in the score in the 9th, thanks to some aggressive base running (a hallmark of this Royals team), before winning in dramatic fashion in the 12th. However, the biggest questions is why Yost, and other baseball managers, manage games differently in the playoffs compared to the regular season?

The best way to explain Yost’s decision to replace Ventura with Shields is pressure. The pressure of a win or stay home Wild Card game is enormous especially for a franchise that hadn’t been to the postseason in 28 years. In the fervor of the moment Yost must have felt that Ventura was his best bridge between starter Shields and late game studs Herrera-Davis-Holland. But Ventura is a rookie who had been a starting pitcher for 30 of his 31 appearances in the regular season. As Ron Darling said on the telecast, expecting a pitcher to perform in an unfamiliar role, especially in the postseason, is asking a lot of that player, especially a rookie. If last night were a regular season game then Shields would have pitched to Moss before turning the game over to the pen in the 7th. So why didn’t Yost stick with the plan that had led to so much success during the regular season?

Maybe Shields was tired and facing the middle of the A’s lineup for the third time in the game was asking too much? Maybe Yost didn’t want to stretch out the H-D-H three headed monster that performs so well in part because they all have clearly defined roles?

There are many reasons why Yost could have managed last night’s Wild Card game the way he did but the pressure of the postseason is the one that makes the most sense. 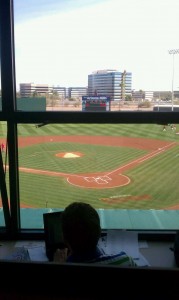 2010 NFL Equivalent – Buffalo Bills: Passionate fan bases, small markets, and recent traditions filled with failures. These are the ties that bind. Each city also boasts a unique tailgating delicacy; Buffalo has the wing and Kansas City the BBQ. In recent years, the Bills have played a “home” game in Toronto. The Royal equivalent would be moving games out of Kauffman Stadium and into Cedar Rapids. (Side note: at what point does Ed Helms branch out and take on a new character? In Cedar Rapids, is he supposed to be playing Andy Bernard on a sales call to middle America?) Lastly, I have a few friends who remain die hard Bills fans while I have yet to meet one single person, outside of Rob Riggle, who still roots for the Royals. (Note: the only reason I went with Riggle here was so I could link to a video from the Catalina Wine Mixer. POW!!)

Google Search: The turnstiles at Kauffman Stadium were spinning this winter as the Kansas City front office gave the roster a thorough face lift. Some highlights include CF Melky Cabrera, RF Jeff Francoeur, and SP Jeff Francis.  If Cabrera is in shape, and that’s a big “if”, he is a serviceable major league outfielder while Francoeur boasts a rocket/laser arm and a complete inability to draw walks. Allegedly, the Royals have a very strong farm system and Ken Rosenthal went as far as to call them the “Rays Redux”. Rosenthal could be referring specifically to prospect outfielder Lorenzo Cain, who will push Cabrera for the starting CF job.  Going out on a limb, even if Cain doesn’t start on Opening Day, it sounds like the job will be his full-time by June.

Famous Movie Quote: Well, what if there is no tomorrow?  There wasn’t one today. – Phil Connors, Groundhog Day.

Royals fans have been through this before, unfortunately.  Rebuilding, retooling, refueling.  Whatever.  Alex Gordon was such a “Can’t Miss Prospect” at 3B that he has been moved to the outfield.  In a league where it seems that every team can hit, the Royals are woefully anemic on the mound.  Besides Francis and Kyle Davies, the rest of their starting staff will have to be cobbled together.  The Royals’ two best players from ’10—Zack Greinke and David DeJesus— are both gone.  This year, their best player is a closer, Joaquim Soria (formerly “The Mexecutioner”; no longer), who may only have the chance to close 2 games a week which means the Royals will most likely end up coin surfing in the cushions of the AL Central couch again this year. 2011 record: 66 – 96; 5th Place AL Central