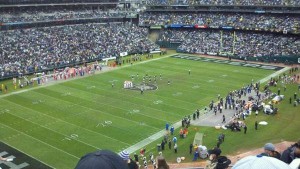 For the first time since the 2009 season opener, the Oakland Raiders played before a sellout crowd today during their exciting 23-20 overtime victory over the AFC West leading Kansas City Chiefs.  With the win, the Raiders pull to within a game of the division lead but, after a week 10 bye, face a very difficult upcoming schedule (@Pit, Mia, @SD). Don’t bet against head coach Tom Cable, who remains the most frightening looking coach in professional sports.

In other AFC news, the Colts and Patriots both lost while the Jets were fortunate to escape Detroit with a win.  The Ravens took care of business at home against Miami while Pittsburgh prepares for a dreary Monday night contest in Cincinnati.  If, as expected, the Steelers hold serve against the Bengals tomorrow night, do they become the AFC favorites once again? Share your views.