Will Leitch, senior writer for Sports on Earth, columnist at Bloomberg Politics and founder of Deadspin, discusses the upcoming 2015 MLB season.

Lana Berry on Twitter and the old vs new media. Plus, the Final Four in Indianapolis and are the New York Yankees and MLB really ready for an Alex Rodriguez renaissance? 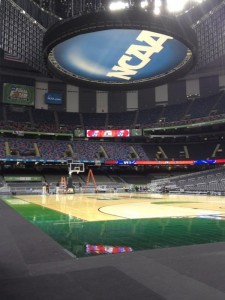 I miss Carmelo Travieso. And Lou Roe. Marcus Camby too. But mostly I miss the days when you got to know the individual players on a college basketball team. Today, in the era of one and done, it is much harder to develop a familiarity with most top 25 college basketball programs. And for fans like myself, who either didn’t go to a BCS school or aren’t from a tradition rich state, following college basketball has become an increasingly difficult proposition. For every Ashley Judd and dialysis patient out there going crazy about their ‘Cats, there are an equal number of people like me who will watch these games Saturday night because that’s what sports fans do and it would down right unpatriotic to not watch the Final Four.

As far as predictions go, I thought it would be best to determine the winner of March Madness by putting the 4 remaining teams through a little hypothetical game involving current NBA players from each school.

I had no idea how few recent NBA players Louisville has produced. Where have you gone “Never Nervous” Pervis Ellison? The Bluegrass State turns its lonely eyes to you. You know the Louisville pros are in trouble when their starting shooting guard Jerry Smith made it onto the squad only because he recently signed a 10 day contract with the lowly New Jersey Nets. To steal a line from Rick Pitino’s pregame speech before Saturday’s semifinal in New Orleans, “Clifford Rozier isn’t walking through that door.”.

As for this roster of Kentucky pros, put them together on a single team and they certainly would be able to beat the Washington Wizards. Take it to the bank Stan Van Gundy!

*currently playing in the D-League

Kansas is kind of like the opposite of Louisville in the sense that I had no idea just how many Jayhawks players were in the NBA today. And the list goes on. (Josh Selby anyone?) What has always been amazing to me is how Bill Self, and Roy Williams before him, is able to recruit 5 star high school players to choose Lawrence, Kansas as the place where they want to spend their college year(s). But who am I to pass judgement on anyone else’s choice in college towns as Waterville, ME continues to have some of the highest rates per capita for both prostitution and fast food.

I’d like Ohio State’s chances that much more if Greg Oden weren’t busy recovering from his 3rd microfracture surgery. If either Jim Jackson or Lawrence Funderburke were still in the league then it would be an entirely different story.

view from the Superdome courtesy of @schuetteKSR 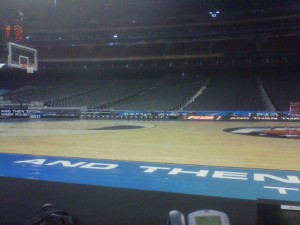