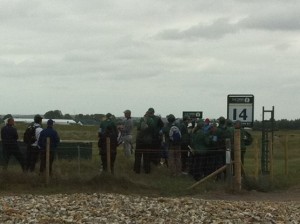 While watching the first round of the Open Championship with a friend of mine we started talking about what a cool guy Steve Stricker seems to be. We dubbed Stricker the “King of the Midwest” for his unfailing ability to win big golf tournaments in America’s heartland. Somehow, the subject of Derek Jeter reaching the 3000 hit milestone came up and then BOOM – it hit us. Which of the two “Kings” would be better to hang out with: tailgating w/ Stricker before a Wisconsin Badger football game or sitting courtside at a Knicks game with Derek Jeter? Fortunately, this question cannot be answered with a simple yes or no so instead I had to break it down into categories.

Food/Beverage: Part of what makes Wisconsin/Big Ten football so enticing is the pregame tailgate. Find me one American who wouldn’t like to spend a Saturday afternoon in the fall stuffing their face full of bratwurst and washing it all down with an ice cold Leinekugel. Stricker also strikes me as the kind of guy who understands how to properly operate a smoker and, for the record, there is no better way to kill 4 hours than slow cooking a brisket. At Madison Garden everything is so overpriced. I’m sure Jeter would be kind enough to pick up the tab but that wouldn’t stop me from feeling somewhat guilty for throwing back a whole bunch of Nathan’s Famous hot dogs and $12 Heineken’s. On a side note, who chooses to drink Heineken anyway? I think my dad did once but that was way back in the 80’s when every adult male in their late 30’s was emulating Gordon Gekko.  Advantage Stricker

Entourage: I’m guessing Jeter would have to bring along his girlfriend Minka Kelly which would be pretty cool because she’s gorgeous and we could talk all about her HUGE role in Friday Night Lights. However, top to bottom, it’s hard not to take the Badger faithful over Jorge Posada, Mariano Rivera, and Gerald Williams. Gerald Williams you may say. Well, I too was wondering what the heck the Eddie Murphy look a like, and former Yankee, was doing sitting in Jeter’s private box during the 3000 hit game. Either the two remain close or there was a major glitch in security that day.  Advantage Jeter

Conversation: I feel like Jeter would be really distracted during out brief time together. Sitting courtside isn’t the most conducive environment for quality conversation what with the action only a few feet away. Not to mention that all of New York would be passing by our seats and starting one of those brutally annoying and played out “Derek Jeter” chants. Conversely, there is no better atmosphere for friendly banter than the tailgate. And who better to spend hours talking to than a professional golfer? These guys spend rounds of golf shooting the breeze with their caddies and fellow competitors. So they have a lot of practice and would certainly be able to carry on a conversation with a 20 handicap like myself. I would also love to ask Stricker how he and Tiger Woods became such good friends and Ryder Cup playing partners. They seem like such different people and I as far as I know Stricker prefers IHOP over Perkins. Advantage Stricker

Exposure/Bragging Rights: Trust me, your friends would not really care that you traveled all the way out to Madison to see a Badger football game from Camp Randall with Steve Stricker. To me, that’s the charm of the experience, getting to blend in with the crowd. At MSG, with the Yankee Captain, there would be no such thing as blending in. In fact, your face would be plastered on the jumbotron during most timeouts. All of your friends could watch the game from home and see you sitting directly across from the Knicks bench and wonder why they aren’t as lucky. Who knows, you may even get yourself a halftime interview with Walt “Clyde” Frazier, which to me would more than make the whole experience. Advantage Jeter

Atmosphere: Madison in the fall trumps NYC in the winter/spring. Even though the big city is truly one of the most beautiful places to be during the holiday season. The pace of Midwestern life suites my current station in life much more than the busy, on the go pulse of NYC. The people of Wisconsin are also much more understanding of an outsider than the Garden faithful. New Yorkers can smell an outsider a mile away and will test you if they sense that you do not belong. Whereas the people of Madison are just so darn happy to have another person to have a beer with.  Advantage Stricker