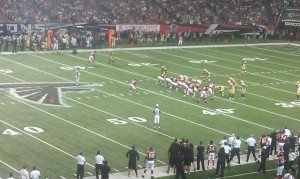 I love a good holiday weekend, even if Columbus Day is one of the most controversial federal holidays on the calendar. Maybe the entire country should go the way of Berkeley, CA and change the name to “Indigenous Peoples Day”. If you’re looking for a good read on what this land was like before Columbus and his merry band of disease ridden malcontents arrived, take a look at “1491” by Charles Mann. Excellent and investigative take on the culture and progress of the indigenous peoples of the Americas. But enough of the book review, on to a quick NFL Sunday recap for Week 5.

Bills 31 Eagles 24 – The Bills lead the AFC East, MIke Vick broke the career rushing record for an NFL QB, and the Philadelphia Eagles dropped to 1-4 on the season. I joked last week about the need for the Philadelphia Phillies to keep winning to help take some of the pressure off of this abysmal start for the Eagles. Unfortunately, that didn’t happen so while Ryan Howard is at home nursing a torn achilles, the heat is only going to intensify on Andy Reid and his basement dwelling Iggles.

Vikings 34 Cardinals 10 – Speaking of the Eagles, two former Philadelphia QB’s, Kevin Kolb and Donovan McNabb, squared off against one another in the Metrodome yesterday too see who could amass a lower passer efficiency. Adrian Peterson had a good afternoon with 3 early touchdowns and this was the game most people should have taken in their survivor pool. However…

Seahawks 36 Giants 25 – Nearly 70% of remaining survivor pool contestants lost because they bet against Clipboard Jesus. If you look closely, you can find Charlie Whitehurst on the cover of most Southern Rock albums from the 1970’s.

Steelers 38 Titans 17 – I can’t decide if Ben Roethlisberger is really tough or just an attention seeking prima dona. He always seems to have these mysterious injuries which threaten to keep him out of action until he “recovers” in time to put up ridiculous numbers like he did Sunday against the Titans.

Raiders 25 Texans 20 – With the recent passing of Al Davis the football karma gods were clearly on the side of the Raiders Sunday afternoon in Texas. Too bad most young football fans don’t entirely understand the impact Davis had on the NFL. I will forever be thankful to the Raiders owner for two reasons: 1) Bo Jackson and 2) the Lane Kiffin firing announcement.

Chargers 29 Broncos 24 – The Republican Party should consider asking Tim Tebow to run for President in 2012. Think about it, they would be guaranteed a win in at least two swing states, Colorado and Florida, and the QB’s presence in the upcoming debates should be inspiring enough to keep even Rick Perry awake.

Patriots 30 Jets 21 – At this point, Jim Nantz, will all of the New England games he has called over the years, has to own a home in the Foxboro area. At the very least he splits a time share with Phil Simms. Now I’m not saying Nantz favors the Patriots but I did find it a little peculiar when Bill Belichick’s red challenge flag came flying out of the CBS broadcast booth during yesterday’s game with the Jets.

view from the Georgia Dome courtesy of @EricFisherTWC