I love baseball. Always have. Yet with life being as it these days – dad, spouse, employee, dad again – I rarely make much of an effort to sit down and watch for any extended period of time. But I miss it. The rhythm of baseball gives me comfort and peace. So I made a deal with myself, to watch an inning a day for the duration of the 2017 MLB season. The daily dairy won’t deliver much in the way of research or analytics – there are enough high quality experts out there with an academic grasp of the sweet science – but I am hopeful it can provide some mildly interesting observations about a game that has given me so much.

Welcome to the bottom of the 3rd inning in St. Louis where the Cardinals announcers tell us that the temperature is going to reach 80 degrees this afternoon. That’s a little toasty for April. The pitcher Michael Wacha leads off against Gerrit Cole. Good pitching matchup in this one. Although I’m not so sure if Wacha is living up to expectations after a promising start. As a rookie didn’t he contribute World Series title?

Wacha strikes out swinging. One out.

I still don’t totally understand why Dexter Fowler left the Chicago. Unless the money/years were that much better in St. Louis why leave such a comfortable situation?

As I was saying. Cardinals announcers call Fowler’s first home run of the season a potential slump buster. It’s his first RBI too.

Andrew McCutchen with a great play. I assume he’s back in centerfield because Starling Marte was suspended for PEDs. Vice Sports interviewed Victor Conte, a BALCO infamy, about the drug Marte tested positive for and his basic point was that it was the worst substance to cheat with because even a trace amount will stay in your systems for months. The article also mentioned that even incidental contact with the hormone can lead to a positive test. I also read – and I forget where this was – that Marte is the best player to ever have been suspended under MLBs “new” drug policy. I find this hard to believe and would be willing to accept other nominations. 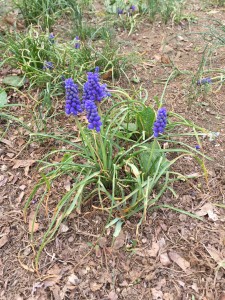 The final few spring flowers that have yet to meet my son’s pitching wedge.

Gerrit Cole throws hard. Although in this day and age I’m not so sure if 99 mph qualifies as all that fast anymore.

Play-by-play guy asks his partner Jim (is that Jim Edmunds???) if a slumping hitter can watch too much video thus reinforcing bad habits. Jim agrees to an extent and adds that as a player he relied on his hitting coach for pointers. We also learn that Yadier Molina is such a planner that he will often fall asleep scouting opposing hitter on his iPad. I’m sure. I tried that very same excuse on my wife a few years back and she was not buying it.

Josh Harrison grounds out to short. One out.

Josh Bell homers to center. Score tied 1-1. One out.

I’ll give it to these Cardinals fans, they show up and support their team regardless the time of day, temperature or record. As an Orioles fan I wish the same could be said about Camden Yards.