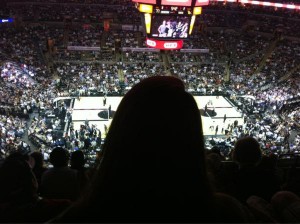 All the arthritis and soft tissue damage in the world couldn’t help the Celtics overcome a virtuoso performance from LeBron James and company as the spry, agile legs of the Heat outlasted the decrepit Celtics 93-79 in game 1 of the Eastern Conference Finals Monday night. And while the geriatric wing of the NBA playoffs attempts to recover in time for game 2 Wednesday night, it’s important to note that in the hyper competitive world of pickup basketball, sometimes advanced age is a positive attribute. Of course, the NBA playoffs are a decididly different animal than your average game of shirts v skins but there is still an important case to be made for the veteran Boston Celtics in their series against the Miami Heat.

To begin with, old guys are much more efficient and effective stretchers. They usually manage to hit all the major muscles groups including the elusive yet essential latissimus dorsal. Anyone who has ever pulled a lat will tell you that the pain is absolutely excruciating. It’s as if someone jammed a dull butter knife in the center of your lower back. Old guys know this and will do whatever it takes to avoid such a debilitating injury, even if their warmup routine begins to resemble something out of The Cable Guy.

When it comes to a younger players approach to stretching perhaps Austin Milbarge said it best when he stated, “We mock what we don’t understand“. When you think about it, young hoopsters are like virgins. They simply do not understand that basketball, like sex, is much more of a marathon than a sprint. The only way to learn this is to first disappoint enough partners until you get to the point where you can’t find anyone else to play with and end up dribbling by yourself for hours. But back to basketball for a second, pull a lat muscle a few times and you’ll realize that proper planning and preparation prevents piss poor performance. The ancient Celtics realize this which is why guys like Ray Allen begin their warmup 4-5 hours before tipoff.

Speaking of Ray Allen, old guys know how to manage their injuries. Boston’s veteran sharpshooter has more spurs in his ankle than the entire San Antonio roster and can get zero lift on his jump shots, even free throws. Yet Ray is still out there playing through the pain, giving his team every opportunity to advance to the NBA FInals. Knee braces, rec specs, fish oil. Old guys will do whatever it takes to keep playing. That’s because time is of the essence and as players get closer to that dreaded expiration date they try to squeeze every last opportunity out of their weathered, atrophied bodies. Conversely, younger players think protective gear is a sign of weakness. You don’t see Chris Bosh out there with a kevlar vest do you?

Also, old guys understand their limitations and have a general disdain for unnecessary hustle.  Dive out of bounds for loose balls? No thanks. Chest bump a teammates after every made free throw? What a waste of energy. (Actually, this last one is not 100% true because if you watch the Boston Celtics during their starting lineup introductions they look like the cast from a Twyla Tharp musical.) In general, old guys like Paul Pierce know how to conserve energy for when it matters most like when taking a fade away 18 footer with a defender in his face or when trying to prevent LeBron from averaging 35 points/12 rebounds/7 assists this series. Weekend warriors are very similar to Pierce with the only exception being that it can be next to impossible to get old guys to play any kind of defense during these pickup games.

Old guys are direct with their feelings and not overtly passive aggressive. Take Kevin Garnett. He’s demanding of his teammates but in a fatherly sort of way where he’ll berate players in a productive almost clandestine fashion so as not to expose them to the ire and scrutiny of the camera. On the exact opposite end of the spectrum is the the Lebron James Mario Chalmers relationship. It’s hard not to feel bad for the young Miami point guard when LeBron is visibly up his you know what just about every time Chalmers makes a mistake. If you were a lip reader what you’d see Chalmers saying to LeBron is, “look I’m so sorry but I promise never to do it again so will you please stop making me feel bad in front of the national television audience“.

Old guys are not afraid to tell you what they want and could give a rats ass what you think about them. From passing them the ball on the outlet to calling for a high screen, weekend warriors have been around the block long enough where they simply no longer fear confrontation. Younger players are by nature too passive agressive. They won’t tell you what they want so much as bitch about you behind your back to your teammates.

Finally, and perhaps most importantly, old guys are unaware of their surroundings and rarely unnerved by the spotlight. Veteran basketball players are like champion race horses. You wont see I’ll Have Another staring off into the infield paddock during the Belmont Stakes looking for a nice unattached Long Island bred filly to cozy up to after the race. Vets like Pierce, Garnett, and Allen have seen it all before and will not be bashful in light of intense media scrutiny and pressure.

With LeBron and the Heat we just don’t know. One of the knocks against the best basketball player in the world is that he is just too sensitive and cares too much about what other people think. It’s probably an unfair criticism but take a look at LeBron next time something goes wrong. He always seems to be staring off into the first few rows of the stands, like he’s constantly seeking approval from Pat Riley, Mav Carter, or maybe even Jimmy Buffett. Again, older guys don’t look around cause time if of the essence and they don’t care about what anyone else thinks. During pickup games, do you really think your CPA Frank is distracted by the fact that the health club hasn’t restocked the men’s locker room with fresh towels? Of course not. That’s because Frank is old and old guys don’t care if they have fresh towels because they would just assume drip dry even if it means they’ll have to expose themselves in front of unassuming fellow club members on their way to the racquetball courts.

Old guys don’t care which is why the Boston Celtics have a chance against the Miami Heat.