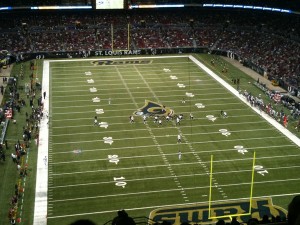 I’m not quite ready to proclaim Sam Bradford the next Kurt Warner, and Danny Amendola is no Isaac Bruce, but people have to be intrigued by the new look Rams.  Bradford has brought a pedigree and instant respectability to the quarterback position and the defense is full of young, high draft picks.  A 3-3 start to the season doesn’t guarantee the playoffs, or even a winning record for that matter, but the NFC West is so weak that nothing is impossible this year.

We may also want to take a closer look at the San Diego Chargers who continue to mystify their fans with another early season swoon.  The Phillip Rivers led offense has plenty of weapons, even without Vincent Jackson, and has shown an ability to dig themselves out of early season setbacks before.  But, when you watch a rejuvenated LaDainian Tomlinson carving up defenses left and right for the Jets this year, you’re left wondering if the real problem is the San Diego coaching staff and front office.