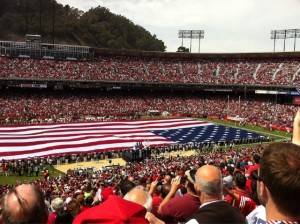 NEW ORLEANS (-6.5) over Chicago: The Big Easy tops the list of cities I wish I visited before I got married. Next is Last Vegas, last is Paducah, Kentucky.

DETROIT (-8.5) over Kansas City: How did Kansas City, a quaint midwestern hamlet, get to be known for its BBQ? Seems like a fairly random pairing sort of like Tom Cruise and Katie Holmes or Rex Ryan and a salad.

Jacksonville (+9.5) over NY JETS: I’ll be in Brooklyn for most of Sunday afternoon and to mark the occasion I expect all you hipsters to don your favorite NBA throwback, replete with a slashed pair of baggy cargo shorts and low top cons. Don’t let me down Williamsburg!

BUFFALO (-3.5) over Oakland: I’m riding these Bills and their new uniforms all the way to the AFC Wild Card!

WASHINGTON (-4) over Arizona: The beltway has jumped all over the Skins as the surprise team in the NFC. Many now believe that Washington will contend for a spot in the playoffs which is remarkable considering that their top 3 wide receivers are Santana Moss, Anthony Armstong, and Jabar Gaffney.

TENNESSEE (+6) over Baltimore: What happened to Chris Johnson last week? 9 rushes for only 24 yards? That’s a horrible performance by even Reggie Bush standards. I guess football players need the preseason after all.

Seattle (+14) over PITTSBURGH: 14 points seems like a lot of points in only the second week of the season. Having said that, I would not be surprised if the Steelers won this game by three touchdowns.

Green Bay (-9.5) over CAROLINA: Ironic that the same week Cam Newton goes off for 400+ passing yards in his NFL debut, The Atlantic publishes a story about the corruption in college sports. It’s a great read and as a historian I really appreciated the comparison of college athletics to colonialism. The whole time I was reading the article I couldn’t help but picture Steve Spurrier aboard the HMS Victory.

MINNESOTA (-3) over Tampa Bay: Don’t like hearing about the large forest fire running along the Minnesota/Canada border and hope it’s under control before destroying too much of the pristine/peaceful northwoods.

INDIANAPOLIS (+2.5) over Cleveland: Is it too late for NBC/ESPN/NFLNET to pull all Colts games out of primetime? If week 1 was any indication, Al and Chris are going to have a tough time filling the air during the second half of Steelers/Colts on Sept 25. I hope Faith Hill is available for a live drop in.

Dallas (-3) over SAN FRANCISCO: Strange that SF Giants CEO Bill Neukom has been asked to step down by the other members of the ownership group. Was it a simple case of “what have you done for me lately” or perhaps a question of financial transparency? Either way, I’ll miss the bow tie.

Houston (-3) over MIAMI: You don’t have to spend nights in the basement of NFL Films to see that this Dolphins secondary is absolutely, positively overmatched. There were a few moments during Monday night’s game against the Patriots where I wanted to physically reach through the television screen and give Nolan Carroll a big hug and tell him that it’s not his fault.

San Diego (+7) over NEW ENGLAND: This Tedy Bruschi/Ochocinco kerfuffle is one of the most overblown kerfuffle’s in the history of kerfuffle’s. Mike and Mike weighed in on the subject this morning and I could have sworn that they were simultaneously agreeing and disagreeing with one another. It was like a bad version of Abbott and Costello’s “Who’s On First”.

DENVER (-4) over Cincinnati: There’s a 60% chance that the entire country doesn’t even know this game is being played. Wait, that doesn’t even make sense.

ATLANTA (+2.5) over Philadelphia: I’m giving Atlanta one more chance before completely bailing on them this season. In retrospect, this is exactly what I should have done with season 1 of the The Killing.

NY GIANTS (-5.5) over St. Louis: Monday Night Football ain’t what it used to be. I can remember being a kid and just hoping to convince my parents to let me watch the first quarter before heading up to bed. Now, I can’t imagine many young football fans clamoring to stay up so they can see Cadillac Williams averaging 3 yards a carry or Eli Manning throwing another red zone interception.