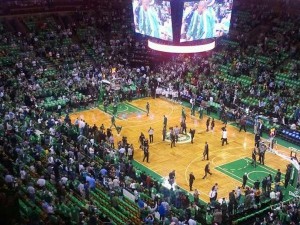 This just in, the Miami Heat have lost a basketball game. Fans must now wait at least one more game before crowning the 2010-2011 Heat the best team since the ’96 Chicago Bulls.  Tonight’s game against the Boston Celtics was not as close as the final score makes it seem.  In the second half, Lebron James did the best he could to salvage a poor performance by Dwyane Wade, while the Celtics were led by their own version of “The Big Three” plus a very active/creative Rajon Rondo.

And while on the subject of nicknames, James, Wade, and Chris Bosh need a better nickname than “Miami Thrice” or “Three Degrees”.  Suggestions? One things for certain, it’s impossible for even casual NBA fans to not feel strongly, one way or another, about the Heat.  Love ’em or hate’ em, you’re going to be seeing a lot of them on TV this year.  So, you better get use to the view.