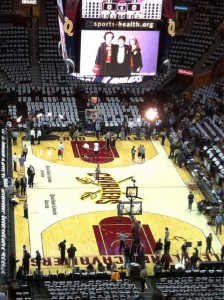 We wanted drama.  We wanted to see someone foul LeBron James hard as he drove to the basket.  We wanted verbal sparring and double technicals. We wanted Cavs players to act and care like spurned lovers who had just been rejected by their high school sweethearts. We wanted to watch a hard fought, competitive basketball game that went down to the wire. We were all disappointed.

My major takeaway from The Return is that players don’t care as much as fans.  It made me sick for Cleveland when the Cavaliers bench was seen smiling and joking with LeBron during the middle of the first half.  This struck me as totally out of touch. Shouldn’t the Cavs bench be more aware of the damage The Decision has done to the people and city of Cleveland? Or, as fans, are we asking too much of our professional athletes to care as we do?

Share your views. Also know, I’m still not convinced the Heat are a legit contender this year.  The Cavs team they destroyed last night could be one of the least talented teams in the entire league.