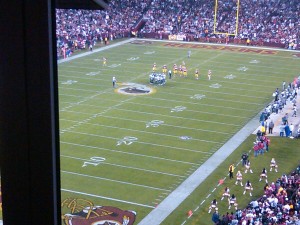 Those dollar signs are for Donovan McNabb and Michael Vick, the starting QB’s in last night’s Monday Night Football game where Vick’s Eagles destroyed McNabb’s Redskins by a final score of 59-28. Before the game, it was announced that McNabb had just signed a new contract extension with the Redskins which could guarantee him $78 million over 5 years.  It has since been reported that Washington may only be on the hook for $3.75 million this season and could cut ties with their franchise quarterback as early as the end of the 2010 campaign.

Vick, on the other hand, has put himself in position to make a ton of money this off-season.  If he continues playing at his current level, 6 total touchdowns last night alone, he will become the most highly coveted free agent.  But why would the Eagles let him go?  Are they really committed to QB in waiting Kevin Kolb?  Why not sign Vick and trade Kolb to a team in need of a young, potentially productive, quarterback?  If Vick doesn’t resign with Philadelphia, could he ink with Washington and replace McNabb for the second time in his career?  Share your views.