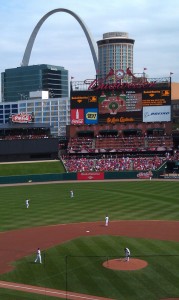 This will be the last baseball centric Musings for 2011. With the playoffs around the corner, you can expect a little post season preview sometime later this week. Until then, enjoy your quick trip around the bases, it’ll be a while until the next.

A Quick Around the Bases

1B – With the MLB playoffs set to begin this Friday, now feels like as good a time as any for baseball to consider adding 2 wild card teams to the post season. In this new plan, each league would hold a one game play in game between the two wild card teams with the idea being that this extra “series” would compel teams to compete for division titles rather than settle for the wild card. Anyway you slice it, the Baltimore Orioles are getting no closer to their first post season appearance in nearly two decades.

2B – Moneyball the movie opened in theaters this weekend and finished second at the box office behind Lion King 3-D with roughly $20 million. Reviews are incredibly positive and I myself look forward to seeing the film, just as soon as I read the book. And before you sabermetricians begin to judge, most of my nightly reading consists of stories that involve a cow jumping over the moon so it could be some time before Moneyball makes its way to my nightstand.

3B – After a historically inept season, Adam Dunn Chicago has got to do some serious brainstorming to do this offseason. I can personally attest to the notion that hitting a baseball is in fact the most difficult thing to do in sports, well ahead of running a ten yard out pattern or taking a charge against LeBron James. However, when you’re given $56 million and end up hitting roughly .160, you are going to open yourself up for some extra criticism.

HR – The new Miami Marlins logo leaked  this past week and nearly everyone is appalled. The new design will make the team look like a bunch of jai alai players. Quick note, when betting on jai alai, always put money on the heavier set player with a name like Garapudo or Romeo. Those guys always know how to use a cesta.