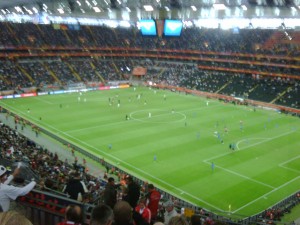 Before we delve into our weekly smattering of all things MLB, a few quick notes regarding the gut wrenching conclusion to an otherwise emotionally uplifting, expertly played 2011 Women’s World Cup. I feel for Abby Wambach the most. I couldn’t find anyone on the pitch who played with the same heart and determination as the USWNT striker. Her nose for the ball, literally, led to two of the most remarkable goals in American World Cup history, men’s or women’s. Wambach would be welcome on my pickup basketball team any day of the week. Here’s hoping there’s enough left in those 31 year old legs, and forehead, for her to return for one more World Cup run in 2015.

My absolute favorite part about the Women’s World Cup was that there did not seem to be anywhere near the same amount of on field theatrics/injury faking as there is with the men’s game. The single exception that I witnessed was the Brazilian player Erika whose performance in extra time against the Americans would have made Orson Welles proud. In general, there does not seem to be as much diving in the World Cup as say the English Premier League, or even worse, La Liga. It’s so bad in the Spanish League that I’m waiting for Paul Pierce to have his contract purchased by Barcelona.

Congrats once again to the USWNT on their fantastic run to the World Cup finals. Now onto a sport where there’s is no such thing as a fake injury, that is unless your name is Derek Jeter.

1B – All of America not named Milwaukee, Cincinnati, or St. Louis hopes the Pittsburgh Pirates will continue to hold on in the wide open NL Central. If there were ever a year for the Pirates to make a playoff since the days of Andy Van Slyke, Chico Lind, and a pre bobble head doll Barry Bonds, this is it. The only question is, will the Bucs be buyers or sellers at the trading deadline? Pittsburgh’s starting pitching has been surprisingly effective and what the team could really use moving froward is another bat. Would Carlos Pena from the Chicago Cubs suffice? Or how about Ryan Ludwick of the San Diego Padres? Whomever they target, it’s nice to know that the Pirates aren’t selling parts at the trading deadline.

2B – Speaking of the NL Central, how bad can it get for the Chicago Cubs? This disturbing picture from @bleedcubbieblue tells you all you need to know about the 2011 season on the Northside. With this many open seats, ownership could probably get away with a few midseason renovations to Wrigley Field as has been previously discussed by the likes of @pgammo. The bigger question raised by this photograph, where have all the Chicago hipsters gone? Usually the bleachers are good for at least a dozen Craig Hodges jersey’s and neon Ray-Ban sunglasses with croakies. Don’t tell me they have switched their allegiances to the White Sox. US Cellular Field is not the type of place for members of the counter culture, unless that independent thinking includes Harley Davidson motorcycles.

3B – Would a member of the AL Central please step up and claim your prize? Anybody? Going once, going twice…I guess we will just have to wait until the final week in September.  And who knows, the way these teams are beating each other up, the division winner may ultimately be only a game or two over .500. And is anyone really surprised by the resurgence of the Minnesota? Just goes to show you that you can never count out the Twins, especially as the summer heats up and the walleye on a stick at Target Field is becomes especially fresh. The Minnesota state government may stay shutdown but that doesn’t mean that the Twins won’t be able to prevail in the AL Central once again.

HR –Moneyball the movie looks terrible. And I know we’re not supposed to judge a film by its trailer – even though I do this all the time – but even still, how can this be an interesting movie? I begin with the casting of Brad Pitt as Oakland A’s GM, and famous sabermetrician, Billy Beane. I don’t know about you but I find Pitt much more convincing when he’s fly fishing in the streams of Montana than when he’s rebuilding a bargain basement franchise by using cutting edge statistical analysis. What, was Billy Bob Thornton not a physically attractive enough specimen to play the role Beane? Also, any movie that has Scott Hatteberg at the center of the story telling is bound for box office purgatory. Which is probably why I’ll go and see the movie the first weekend it comes out.