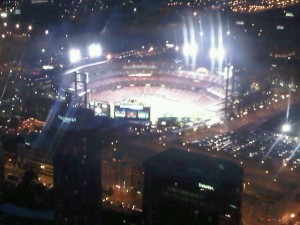 There was very little science to watching Rory McIlroy dominate the 111th U.S. Open. With every twirl of the club, viewers at home knew the shot was pure. He took control of the tournament on Thursday and didn’t bother to look back. The most impressive aspect of McIlroy’s performance was how effortless he made everything look. Perhaps this will all change with age but for right now at least, he does not look like a golfer consumed by the “process”.

Other golfers, like Tiger Woods, are consumed by their “swing plane” and “hip rotation” that they stop trusting their instincts. Rory is blessed with so much natural ability that he can just see it, hit it and and believe in the results. In this the day and age of the swing coach, it’s refreshing to watch a golfer believing in himself like McIlroy did at the U.S. Open. Perhaps a lesson to all aspiring major champions.

1B – Injuries. Injuries. Injuries. First Carl Crawford. Then Clay Buchholz. And now Albert Pujols. I’m sure the Red Sox can survive for a short while without the services of Crawford and Buchholz but what in the wide wide world of sports are the Cardinals supposed to do without King Albert if his sprained wrist keeps him on the sidelines for any extended period of time? I’m sure manager Tony La Russa will come up with something “inventive” like perhaps batting the pitcher 3rd or playing with two first basemen.

2B – I would feel much worse for the Florida Marlins and their fans if they actually had any fans. How dysfunctional is a team when their manager, Edwin Rodriguez, resigns after 71 games? Los Fish are losers of 10 in a row and have know slipped to last place in the NL East while their owner, Jeffrey Loria sounds about as fun to work for as Bill Lundberg. And now, the Marlins are poised to hire 80 year old Jack McKeon as interim manager to finish out the season. Question is, why would McKeon be interested in the job? At his advanced age he ought to more concerned with counting the lumps in his oatmeal than thinking about filling out a lineup card.

3B – Interleague play continues Monday with several marquee matchups including the Baltimore Orioles visiting the Pittsburgh Pirates. Well, maybe not this particular series, unless we were somehow miraculously transported back to the mid ’70s, but there are several other intriguing pairings this week like Rays/Brewers and Twins/Giants. I for one can do without Rockies/Indians, Angels/Marlins, A’s/Mets, and Astros/Rangers. Price you pay for interleague play.

HR – Justin Verlander really is a throwback to the days where there were no bullpen specialists to speak of and starting pitchers were expected to go deep, if not finish ballgames. Including yesterday, Verlander has thrown 4 complete games this year, matching his total for the entire 2010 season. Pretty impressive stuff for a guy who is still bringing triple digits in the 9th inning.

Fielder’s Choice – And lastly, in regards to the season 1 finale of The Killing on AMC, what the heck was that? After last night it feels like I wasted 13 hours of my life on this show. Following the web this morning, it’s clear that I am not the only one who felt betrayed by the season finale. Who killed Rosie Larson? As of this morning we don’t know and frankly, don’t care.

view from atop the St. Louis Gateway Arch courtesy of @mattwettersten