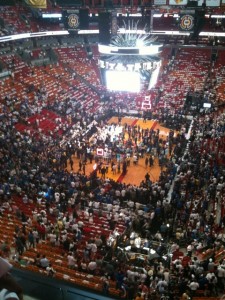 Congrats to Dirk Nowitzki and the Dallas Mavericks for ending our season long nightmare by defeating the Miami Heat in the NBA Finals. LeBron James will have to wait at least one more season before claiming his first championship. On the ABC postgame, Jeff Van Gundy tossed out the notion that the Miami front office would possibly entertain the idea of trading LeBron or Dwyane Wade for either Chris Paul or Dwight Howard this offseason because, in his mind, the pieces just might not “fit” as currently constituted. Don’t you have to wait at least one more year before blowing the whole thing up?

For me, the arithmetic just doesn’t add up on this one. LeBron will be back. Dwyane Wade will be back. Even Chris Bosh and Coach Spoelstra will return for another season in South Beach which is what we should all want, another opportunity to root against the Miami Heat.

As the curtain falls on an incredibly entertaining NBA season, and the Stanley Cup Finals stare down a Game 6 tonight in Boston, MLB is about ready to take center stage for the long summer months. And who knows, if the billionaires and millionaires that operate the NFL don’t get their s*#$ together soon, we could be looking at nothing but baseball chatter for the foreseable future.

1B – I guess we all spoke too soon about the Cleveland Indians. Losers of 9 of their last 10, the Tribe are starting to play like the team we all thought they were going to be before the 2011 season began. And now here come the Detroit Tigers and Chicago White Sox ready to make a race of the AL Central. Two questions: can the Indians hold on a little longer, say until the all star break or are they in the midst of a total free fall? Second, the Twins have won 8 of 10 and sit only 9 games out of the division lead. With a healthy(?) Joe Mauer returning behind the plate this week, does Minnesota make their traditional run to the top of the standings or are they simply snake bitten this season?

2B – Good for you Atlanta! At least we have one team willing to hang in there in the NL East and not allow the Philadelphia Phillies to sit back and map out their postseason pitching rotation starting in August. Is Brian McCann the best catcher in baseball right now? With Posey and Mauer both injured, and my main man Matt Wieters quietly emerging but not quite yet ready for prime time, McCann is probably the gold standard right now.

3B – The Chicago Cubs are not a good baseball team. Whenever Lou Montanez is batting 3rd in your lineup you know you have issues. Not only are the Cubs struggling on the field but now Peter Gammons, MLB columnist and baseball emissary especial, has called Wrigley Field a “dump” and mentioned how the new ownership group in Chicago, the Ricketts family, is not prepared financially to handle the cost of essential ballpark renovations.  Of course, take anything the Boston based Gammons writes with a grain of salt. If Larry Lucchino or Theo Epstein were to go to the bathroom in the middle of Boston Common Gammons would find a way hail the masterpiece as an important work of impressionist art.

HR – Derek Jeter is now 7 hits away from 3,000 and unfortunately for Yankee fans it doesn’t look like the Captain is going to reach this milestone in Yankee Stadium. I guess it’s possible, 7 hits in 4 games at home this week, but in all likelihood Jeter will reach 3K in Wrigley Field over the weekend in front of 40K over served Chicago Cubs fans. Ahhhh the memories.