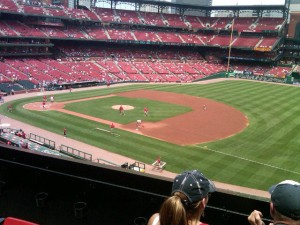 1B – Memo to the Chicago Cubs pitching staff, with the game on the line don’t pitch to Albert Pujols. He will beat you silly and steal your lunch money. The more I think about it, Pujols is Mongo from Blazing Saddles. But instead of shooting him, better not hang a breaking ball or leave a fastball middle in because you’ll just make him mad.

2B – Can the Mets really trade Jose Reyes this summer? I know they CAN but should they is the question. True, he is having a tremendous year and the Mets probably can’t afford a Carl Crawford like ransom for him when he becomes a free agent at the end of the year but if you get rid of Reyes, and then Carlos Beltran after that, you might as well invite the entire Buffalo Bison Triple A team down to Citi Field. Talk about attendance issues, Queens is going to be a ghost town come August. There will be more people watching US Open tennis at neighboring Arthur Ashe Stadium than there will be at the baseball game.

3B – At some point, MLB should consider using a lottery to determine draft order because who wants to see the Pittsburgh Pirates picking 1st again this week? Top draft picks haven’t helped them over the last decade and a half so what’s to think it’s going to help this year. (In the sake of full disclosure, as a Baltimore Orioles fan the same should be said about my team too.)

HR – Non baseball musing of the morning, The Killing, what the heck was that? SPOILER ALERT!!! It’s episode 11 of 13 of a season long search for the killer of a teenage girl and you decide to spend the entire hour focusing on the missing son of one of the lead detectives? Now is not the time for character development. Please don’t tell me we are going to wait until season 2, if there is even going to be another season, to find out who killed Rosie Larson.