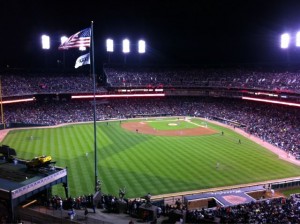 Not to get all Ken Burns on you, but I’m watching more of this year’s MLB playoffs because of the final day of the regular season. For baseball fans like myself, September 28th was a reminder of how dramatic and exciting the game can be. As a country, Americans have slowly started to trend away from our national pastime, choosing instead to set the DVR for the less time consuming and faster paced football or basketball. And to be fair, I myself did not intend to watch any baseball that Wednesday evening after agreeing to attend a special screening of Pearl Jam Twenty in New York City, which, in retrospect, was a fairly radical decision for a 32 year old male who no longer wears flannel.

Flash forward three hours. My first move after hopping on the 10:22 out of Grand Central Station was to fire up the MLB At Bat app on my iPhone, a feature which I have not used since the Orioles dropped twenty games below .500 in Mid July. Standing there in the nearly vacant bar car, I was pleasantly surprised to find that neither the Yankees/Rays or Red Sox/Orioles games were over. And then, just as the express train cruised passed Larchmont, Dan Johnson hit the homerun to tie the game at 7 causing the Chris Christie look-a-like sitting across the aisle and drinking a Coors Light to stand up and give a jubilent, yet solitary fist pump. I never did bother to ask the New Jersey governor if he was a Rays fan or Yankee fan just happy that the Red Sox path to the playoffs was about to take an even more circuitous route. Either way, thanks to baseball, that 52 minute non-stop trip from Midtown Manhattan to Stamford, CT felt like it took no time at all.

That night, I was back on my couch in time to watch the conclusion of both games and I guess I’m telling you this story today because here it is Tuesday morning, with another long work week looming, and I’m already fighting serious sleep deprivation having stayed up to watch Yankees/Tigers. As John Sterling says, “you just can’t predict baseball”.