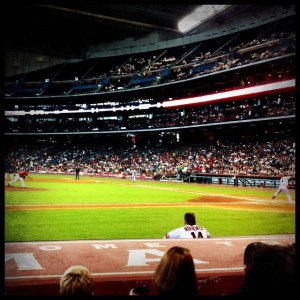 I left the BBQ behind for a a few moments Sunday night to watch the lead segment on 60 Minutes about the heroic story of Medal of Honor recipient Sgt. Sal Giunta. At one point, he calls himself a “mediocre soldier” and Lara Logan reminds him that the Medal of Honor is quite an honor for just a “mediocre soldier”. His response: “think how good the great soldiers are”.

His story, and that of his squadron in Afghanistan, provided an entirely deeper context to the meaning of teamwork, courage, humility, and sacrifice. We use these words everyday to describe the accomplishments of our sports stars but in light of this Memorial Day weekend, it’s important for all of us to recognize and honor our true American heroes.

1B – “Finkle is Einhorn. Einhorn is Finkle. Finkle is a man!”

Apparently Jon Heyman has had his fill of Ace Ventura references but come on, sometimes life just tees one up for you. So now the former Miami Dolphins kicker owns a 30% stake in the Mets and immediately skeptics wondered if this was a good investment. My feeling is that you don’t make billions betting against the likes of Wall Street badies Lehman Brothers and Bear Stearns without having some sort of financial acumen. Einhorn must be in line for a majority stake, that is unless he too is eventually linked to a Madoff type ponzi scheme. “Laces out!!!”

2B – Time for a little game I like to call “Dead, Alive, or current Diamondback”. First contestant: Luis Gonzalez. Incorrect! Luis Gonzalez is not a current Diamondback. Next: Curt Shilling. No soup for you! Shilling is not dead and is in fact currently working for ESPN. Last one: Melvin Mora. I’m sorry, wrong again!!! Mora is both alive and a member of the 2011 Arizona Diamondbacks.

Maybe it’s time we all started to get to know a few of the folks who currently reside in Phoenix. Heading into Monday night the Diamond Dogs had won 6 in a row, 9 of 10, propelling them to a half game lead in the NL West. Not bad for a bunch of guys not named Shilling, Gonzalez, Johnson, Grace, or Williams.

3B – Yes Mr Francesa I understand one of the the only reasons we care is because Buster Posey is a “bonafide staaa” but even still, why can’t home plate be like every other base? Slide to avoid. It’s how all ballplayers are taught to play nowadays. The NFL has outlawed helmet to helmet collisions why can’t MLB and the players association agree on a rule change to protect catchers? Relax, old school/part of the game people, the sanctity of the game will survive.

HR – The Boston Red Sox keep on winning in part because Carl Crawford finally decided it time to earn some of that money. Too Good to Fail, that’s what I’m going to start calling this 2011 Boston team. Speaking of Wall Street, finally sat down to watch the documentary Inside Job about the financial collapse of 2008. Interesting stuff, assigns blame to every entity imaginable. Bankers? Greedy. Regulators? Stooges. Government? Well since they use to be the bankers and the regulators they’re greedy stooges. Bottom line: filmmaker may have had a small political agenda but there is enough evidence presented to make even the most bipartisan American angry, skeptical of our financial system today.