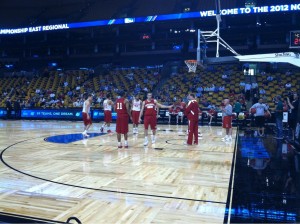 Like most bloggers who are fresh out of new ideas or gimmicks, I have resorted to a method employed by many novice bracketologists, including my wife, where I pick the winners of the upcoming Sweet 16 games based solely on the mascots. I will do my best to avoid any and all references to the honey badger or my favorite sports movie of all time.

(1) Syracuse Orangemen vs (4) Wisconsin Badgers: Bucky the Badger embodies many of the same qualities as the great people of Wisconsin: friendly, down to earth, and looks much much slimmer in vertical stripes. But the Syracuse Orangeman is refreshing citrus personified. I see that big bobbleheaded mascot and just want to squeeze it for some fresh natural goodness. Speaking of fresh natural goodness, I’m on a bit of a grapefruit kick right now and every time I cut up a section with my specially designed grapefruit spoon I always think about the Seinfeld episode where George can’t stop winking. Mr. Weatherbee. Advantage: Orangemen

(2) Ohio State Buckeyes vs (6) Cincinnati Bearcats: What is a buckeye exactly? I remember travelling through Columbus once and stopping by a local sweet shop where they served these wonderfully delicious peanut butter filled chocolate confections called buckeyes. Up until that point I always figured that by judging from the decals on Ohio State helmets the buckeye was some sort of homage to medicinal marijuana. Either way, Bearcats are known connoisseurs of home made fudge and cannabis. Advantage: Buckeyes

(1) Michigan State Spartans vs (4) Louisville Cardinals: I never understood the whole 300 thing. For a while there it seemed like we were raising an entire generation of young people who looked up to King Leonidas more than even their own parents. Don’t kids understand that those abs aren’t real and that defending Thermopylae is not an acceptable form of physical fitness? Advantage: Spartans

(3) Marquette Golden Eagles vs (7) Florida Gators: Here’s what I don’t understand about college sports, how come some schools like Marquette and St. John’s switch to a much more politically correct mascot while a school like North Dakota is working to keep the Fighting Sioux?  To be honest, I like Golden Eagles much much more than Golden Warriors even though I’m not even sure there is such a thing as a golden eagle. Advantage: Gators

(3) Baylor Bears vs (10) Xavier Musketeers: A couple months back, 60 Minutes aired a segment on these Texas wildlife preserves/high priced hunting retreats stocked with all sorts of endangered species from Africa. Apparently there are these super rich Teddy Roosevelt types who spend hundreds of thousands of dollars just to have the opportunity to hunt and kill a nearly extinct scimitar horned oryx. Frankly, if I had that kind of cash lying around I think I would pay somebody else to catch my dinner while I waited around the weber grill with a cold can of Dale’s Pale Ale in my hand.  Advantage: Musketeers

(1) Kentucky Wildcats vs (4) Indiana Hoosiers: True story, my brother in law’s middle name is “Hoosier”. For a while there I thought it was because my in laws were enormous John Mellancamp fans but as it turns out my father in law stopped listening to his music shortly after dropping the “Cougar”. I wish more parents named their kids after state nicknames. I have lived most of my life in New Hampshire and Connecticut so a “Nutmeg” or “Granite” Lord could be two distinct possibilities for any future offspring. I should probably run this by my wife first. Advantage: Hoosiers

(1) North Carolina Tar Heels vs (13) Ohio Bobcats: Please allow me to be the 521st blogger this week to mention how awesome and authentic Clark Kellogg’s reaction was upon hearing the news that his son Nick’s Ohio team was headed to the Sweet 16. Pretty genuine moment right there, one that all parents can only hope to experience. (No pressure son!!!!) Unfortunately for the Bobcats, Tar Heels is a really an amazing mascot, even though most people don’t know what a tar heel is or what exactly it has to do with a ram. Advantage: Tar Heels

(1) Kansas Jayhawks vs (11) North Carolina State Wolfpack: With all due respect to the diehard fans of the Hangover franchise, this one was over at Rock Chalk. Although when watching the KU student body sing the Alma Mater one can’t help but feel that to be a Jayhawk is to be a member of a very exclusive cult that holds large gatherings in Fogg Allen Fieldhouse where they worship the spirit of Wilt Chamberlain. Advantage: Jayhawks