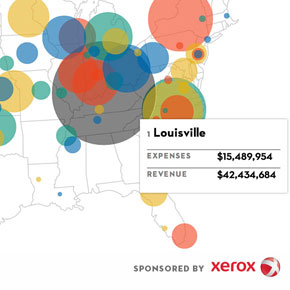 Your sports infographic of the day comes from of all places the New Yorker that final bastion of meandering profiles and incongruent animal cartoons. This particular interactive feature charts out March Madness results by budget with a specific eye towards determining whether or not the money a college basketball programs spends and earns determines their success in the NCAA tournament. For instance, Kansas, the top seed in the south region, has $13M in expenses compared to $16M in revenue. Conversely, Western Kentucky, the Jayhawks second round opponent, spent only $3M with $3M in revenue. So, was money the primary reason Kansas defeated Western Kentucky by a final score of 64-57 or are there other more important factors involved?

In my opinion it’s hard not to listen to Deep Throat and “follow the money” as programs like Kansas can afford to spend more money to attract the best coaches who’ll then be given access to vast amounts of recruiting resources which will help them attract the nation’s best high school basketball talent. If each round of the NCAA tournament was played as best of 7 series then you’d normally see the bigger budgeted programs win out. But because it’s single elimination schools like Florida Gulf Coast, $1M expenses, can defeat two schools, Georgetown $10M and San Diego St $4M, that spend a lot more money. The irony is that with FGC’s improbable run to the Sweet 16 school regents are scrambling to raise the cash necessary to keep coach Andy Enfield around for a few more years.

Take a look at this New Yorker article, it’s really interesting and who knows, may come in handy as you fill out the remainder of your bracket. – JL

view of the NCAA Money Bracket courtesy of @NewYorker