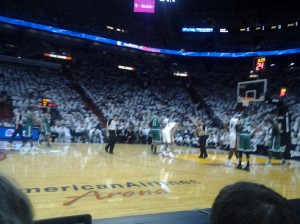 All hail the wonderful world of twitter!!! Only there can we experience game 5 of Heat/Celtics through the eyes of Crunk Rock impresario Lil Jon.* My only question for Mr. Jon, as part of the “fan up” initiative in Miami, did an American Airlines Arena staffer force you to wear white or was it a personal choice? Either way, the same color t shirt gimmick has officially been played out. I can deal with the white “noise” at Heat games but the light blue/aqua in Oklahoma City is enough to burn a massive hole in my retina.

*Yes dad, believe it or not, crunk rock is an actual musical genre. At least that’s what Wikipedia told me.

Perhaps the best news for the finely aged Boston Celtics, and the worst for Lebron and his amazing 4th quarter performance, is that now the “Tiger Woods withdrawing after 9 holes at the Players Championship” story will dominate national headlines until the magnitude of his latest apparent injury is revealed. At this point, how many of us still believe Tiger will ever regain the form to challenge Jack Nicklaus’ record of 18 majors?