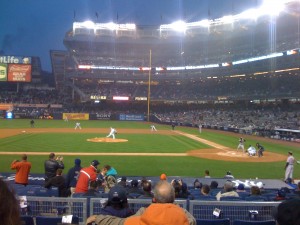 Last night at Yankee Stadium was my first time experience at a baseball game where I sat in a cushioned seat. I always deride the “haves” that sit below “the moat” at the new Yankee Stadium for being out of touch corporate entities that care more about the martini service than the actual game. However, after having experienced life as a member of the bourgeoisie I have an easier time understanding and relating to the Silver Spoons who occupy the upper reaches of the seating chart social pyramid. For a few fleeting hours, that was my cushioned life and those were my privileged people.

Zoom!!! Back to reality. Chris Tillman wasn’t fooling anybody last night. As I commented to one of my friends, it doesn’t look like Tillman has a single “out” pitch, something he can throw at any time, on any count, to retire a batter. The Yankees weren’t falling for either the 89 MPH fastball or the 81 MPH curveball that was breaking five feet in front of the plate. After two measly innings the score was already 6-0 Yankees and I was ready to drown my sorrows in an $11 Bud Light. AJ Burnett was strong once again for New York and if it wasn’t for a few late home runs by Matt Wieters and Brian Roberts I would have left the Stadium in a very depressed state. Alas, the season it still young and the Oriole offense is significantly better than it has been since the late ’90s. If Baltimore can get anything out of their young pitching -Britton, Matusz, Tillman, Arrieta – they should finish above .500 this season.

A few other quick fungos from last night:

– It’s April and the weather was gloomy but Yankee Stadium still felt like a ghost town. Don’t get me wrong, I loved the extra space, but I was just surprised to see so many open seats. Credit the Yankees for offering attendees free bleacher tix to a future home game.

– The ball was really jumping off the bat last night. ARod’s 1st inning oppo blast off Tillman looked like it was still rising when it hit the seats and the Wieters two run bomb in the 7th looked like it was shot out of a cannon. Do people still think it’s too easy to hit a homerun at the new Yankee Stadium? Haven’t heard much of this discussion since year 1.

– Highly recommend the Lobel’s steak sandwich. How often do you find stadium food served with plastic gloves? Well worth the mess if you ask me.

– I have some serious issues w/ Major Deegan – the expressway not the person. On the way home, we were stuck on 87 North for a good 25 minutes before switching over to a different artery. The one positive, listened to the end of Game 1 of the NHL Playoffs between the Rangers and Capitals. Caps came back to win 2-1 in overtime. Don’t know much about hockey but unlike the NBA playoffs, in the NHL an #8 seed has a legitimate chance of upsetting a #1 seed. Apparently it’s all about which team has the hotter goalie and with the Rangers/Caps series, Lundqvist > Neuvirth.

Looking forward to my next trip out to the ballpark. Hopefully Citi Field in early May. I hear there are plenty of good seats still available.