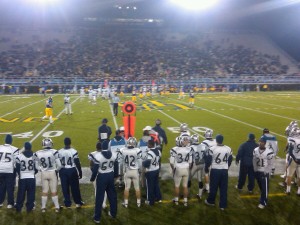 By now, most viewers are aware that I grew up in New Hampshire and while I did not attend UNH, I have become somewhat of a Wildcat booster.  Last night, the UNH football team lost by a score of 16-3 in the quarterfinals of the NCAA Division I Football Championship to the #5 ranked Delaware Blue Hens.  The game was nationally televised on ESPN2 so for many people around the country this was perhaps their first exposure to either program.

Looking at this view carefully it seems that Delaware Stadium was not quite filled to capacity. If you go the University of Delaware, or just plain live in “The First State”, what could you possibly be doing on a Friday night in December that would have prevented you from going to this game?

Two things I know about Delaware: 1) Dogfish Head beer is brewed in Milton 2) the mud used to “rub up” MLB baseballs come from the Delaware River. So unless you were out having a pint in Rehoboth Beach or trolling a tributary for valuable dirt, you have no excuse and you should have gone to the game. Joe Flacco is very disappointed. Share your views.