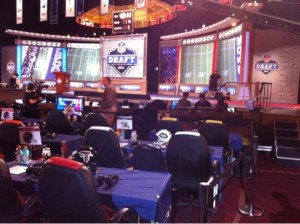 Should the lockout continue into the regular season, here are a few alternative careers for each of the top ten picks in the 2011 NFL Draft

NCAA Compliance Officer; Indianapolis, Indiana – So he can right all the wrongs the next time a father asks for 250K to rebuild a church.

Optometrist; Dallas, Texas – So he can finally put an end to all the Marcus Dupree comparisons.

Venture Capitalist; Toronto, Ontario – Because everything in Buffalo is eventually moving to Toronto anyway.

Reality TV Star; Cincinnati, Ohio – Because Terrell Owens probably isn’t coming back to Cincy and Ochocinco has to be looking for a new wing man/carnival barker.

Athletic Director; Shreveport, Louisiana –  It does say on the LSU website that he majored in “Sports Administration”.

Stunt Double; Hollywood – Just recently hired as a stand in for the upcoming Predator sequel.

Minor league baseball player; Rancho Cucamonga Quakes – Because accuracy issues are much easier to iron out in the Pacific Coast League.

Golf Caddy; Kohler, Wisconsin – For the next time Tony Romo tries to qualify for the US Open..

NHL Analyst on Versus – He really does look just like Jeremy Roenick.