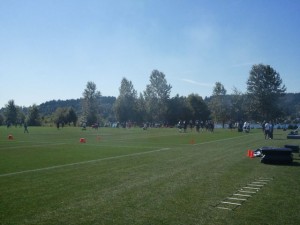 Before tackling the NFC West, 49ers owner Jed York went on the radio this morning out in California and basically said that the NFL needs to reconsider expanding to an 18 game regular season schedule because much of the violence in NFL stadiums can be attributed to preseason games and the type of fans that go to these games. So what Jed York is basically saying is that people who can’t afford season tickets were responsible for the violence at Candlestick Park over the weekend and people who can’t afford season tickets are also the reason the NFL should renegotiate the brand spanking new CBA. Memo to Mr. York, the middle class is dwindling and pretty soon the only people who’ll be able to afford the luxury of season tickets at 49ers games are Mark Zuckerberg and the Google guys. You might want to be careful with making too many class distinctions right now because you’re eventually going to need those beleaguered and destitute souls to fill your stadium.

And now, latest breaking news out of the Bay Area has the Raiders and Niners canceling their annual preseason scrimmage. This is certainly one way to go about it or you could just pay for more security personal to roam the parking lots before and after games. Either way is likely curb violence at the stadium and both seem like a much more practical, measured response to a real problem than potentially waging class warfare on non season ticket holders. But I digress.

Champs: St. Louis Rams – When in doubt, go with the best QB. In this case, even though Sam Bradford is only entering his second year in the league, his repetroire of quarterbacking skills is vastly superior to Kevin Kolb, Alex Smith, and Tarvaris Jackson.

On Deck: San Francisco 49ers – What is the Bay Area press corps going to do without former head coach Mike Singletary. His post game press conferences were comedy gold. Jim Harbaugh has some pretty big shoes to fill when it comes to creating the perfect sound bite. Coach Harbaugh may also want to consider taking a few snaps behind center as well.

Limbo: Arizona Cardinals – Larry Fitzgerald is a nice receiver and all but, that’s a lot of pesos! 120 million for 8 years, how is the team going to afford paying their other players? What happens if the Kevin Kolb experiment doesn’t work out? Then what? Kurt Warner is back to bagging groceries and Matt Leinart is blissfully content backing up Matt Schaub in Houston. Guess you could check in on the whereabouts of Neil Lomax.

Chumps: Seattle Seahawks – At what point during the Tarvaris Jackson experiment do you think Pete Carroll will look over at his offensive coordinator and say: “Holy s*^#! I didn’t think he was this bad. Quick, tell Clipboard Jesus to warm up.”

*Frank Gore is unhappy with his contract and always a candidate for a season ending knee injury.