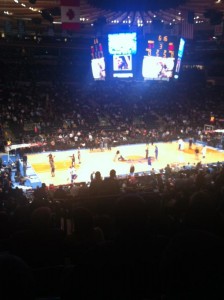 No Melo for 1-2 weeks means much, much more Linsanity. The hesitation right handed dribble around a high screen and roll followed by a bounce pass between defenders leading to an easy layup was a move perfected by our favorite Canadian Steve Nash. Jeremy Lin, while he is no Steve Nash, has shown, for at least the last two games, a similar ability to drive to the basket and set his teammates up for easy scoring opportunities. Embattled head coach Mike D’Antoni will continue to give Lin a shot at being the starting point guard for the New York Knicks as long as the team keeps winning or maybe until a healthy Baron Davis returns to action.

How ironic is it that Lin has a chance to save D’Antoni’s job in New York, a position he earned because of the time he spent with Nash in Phoenix during the halcyon days. The Amare connection makes it all the more real and while this J-Lin Garden party probably won’t continue for much longer, it certainly has made for an exciting New York sports story. Not that there are any shortages of them these days.