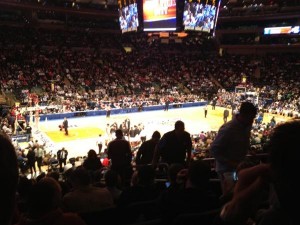 What if life were like March Madness where the hierarchy of every business/place of employment were determined by a bracket? As a high school history teacher I am absolutely fascinated by this concept. Who hasn’t spent endless hours during their lunch break comparing their value to that of Jim over in accounting? What if during contract negotiations your boss were to rank all of the top employees in the company from 1 to 64 and go through the bracket, matchup by matchup, region by region, until a winner, or most valuable employee, was determined? Isn’t this a meritocracy at its best?

I also think it would be interesting to assess what your own personal seeding would be heading into the tournament. For instance, I’m one of 60 or so teachers at my school and that number isn’t even counting administrators, support staff, coaches, etc. Would I even make the top 64? If I don’t, should I be worried about my long term job security?

If I were to make the field it would probably be as an automatic bid from the Southern Conference. I would most likely enter as a #13 seed and take on a high powered at large bid out of the development office. Think Davidson vs Wisconsin. Once the brackets are announced I all of a sudden become a very trendy upset pick, probably because most teachers don’t really understand how the development team got to be a #4 seed in the first place. Then you have guys like Doug Gottlieb and Digger Phelps picking me to make it all the way to the regionals in Phoenix where I would end up taking on a #1 seed like Kansas. Here is were my Cinderella story through March comes to an end as the Dean of Faculty beats me into submission before we even reach the half.

But, as a history teacher, I can feel good about making it to the Sweet 16 especially when very few colleagues predicted me to make it that far. Hopefully my performance in the office value bracket would allow me to keep my job for at least another year until we are ready to start the madness all over again.