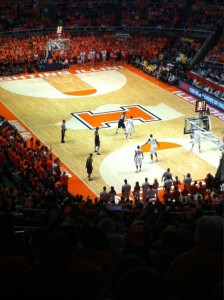 2012 marks the 18th Anniversary of Hoop Dreams, a landmark sports documentary about two young Chicago basketball players, Arthur Agee and William Gates, with high aspirations and hopes for the future. At least that’s what it says on the iTunes plot description. What the movie is really about is two families struggling to overcome all the obstacles and stereotypes that continue to beset African Americans. The film has been airing on one of the ESPN’s recently and it is recommended viewing for anyone looking to revisit many of the complex socioeconomic issues that continue to effect our inner cities. Here are just a few points to consider when watching Hoop Dreams today.

Chicago has been in the spotlight recently due to an unseemly amount of violence throughout certain parts of the city, especially the Western portion of the proper around Marshall High where, coincidentally, Arthur Agee went to school. Agee went to Marshall after not being able to foot the bill at St. Joseph’s. But in reality, if Agee were able to play up to head coach Gene Pingatore’s expectations he probably never would have had to leave the program.

Pingatore, or “PING” as his license plate reads, is a very complex figure. On the one hand, he has had an incredibly successful coaching career, helping place several of his most prized pupils, like Isaiah Thomas and more recently Evan Turner, in some of the most prestigious universities and basketball programs in the country. But at what cost? For every William Gates who shows promise early and is rewarded with Coach Ping’s eternal loyalty there is an Arthur Agee who couldn’t live up to expectations on the freshman team and would be unsympathetically weened off the teat before having an opportunity to complete his education at St. Joe’s.

And speaking of Isaiah Thomas, Hoop Dreams was filmed right around the same time that the Detroit Pistons star point guard, and future office creepster, was left of the 1992 Olympic basketball roster.  As the story goes, it was Michael Jordan, amongst others, who wanted Zeke left off the Dream Team because nobody wanted to play with him.  MJ always seems to be the center of unsubstantiated rumors. Was he kicked out of the NBA for a season because he gambled on basketball? And is he selling his $29 million Highland Park estate because he needs to the money to meet payroll for the Charlotte Bobcats?

But back to Hoop Dreams, one has to wonder whether or not William Gates would have had a better basketball career if he hurt his knee in 2012 instead of 1990. Those scenes from the film where he is having his knee scoped are pretty gruesome. Schools like Indiana, Kansas, and NC State would have probably kept knocking on his door if he still had both menisci.

When he was at the top of his game, it was pretty cool to see Gates compete in the ABCD summer camp alongside future member of Michigan’s Fab Five Juwan Howard, Chris Webber, and Jalen Rose. And how perfect was Dick Vitale when speaking to the prospects? He hasn’t changed one bit. Same enthusiasm. Same hairline. Same tight fitting coaching shorts. Dicky V was talking to the campers about the pitfalls of being a big time college athlete.

Hoop Dreams sheds some much needed light on the cut throat process that is the college recruitment process where young student/athletes are played against the odds. Marquette coach Kevin O’Neill, yeah that Kevin O’Neill, sits down in William’s living room and explains to the high school senior that the Golden Eagles have 2 spots for 7 recruits.  O’Neill probably sat down with each of those 7 families and dropped them all the same line about how if they say they want to go to Marquette then he will stop recruiting other players. This sort of parlor trick no doubt employed by the majority of DI coaches puts a tremendous amount of pressure on the player to make a quick decision lest he be passed over for a more spontaneous recruit.

A few final points/observations. First, it would have been really fascinating to witness a one-on-one game between Agee and Gates during their respective primes. Agee probably had the higher ceiling because he was an incredibly gifted athlete who could get to the basket and create his own shot. But Gates had the polish/mid range game that would allow him to blend in easily with a more established program and coach.

Secondly, it’s pretty amazing when you realize that Williams Gates Jr. is one of the stars of the current St. Joe’s team. Judging from the youtube clips, it looks like Jr’s game is much more reminiscent of Agee than his father. Not surprising considering that Arthur Agee and William Gates will be inextricably linked for all eternity because of Hoop Dreams.

view from Champaign courtesy of @clayharbs82