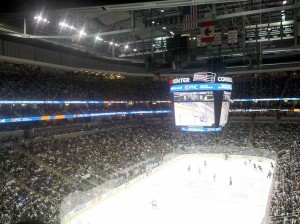 At some point, if the NHL wants to increase its popularity it’s going to have to do one of three things:

1)Move all regular season and playoff games outside.  Casual sports fans love outdoor hockey (just check the ratings for the most recent Winter Classic). Hockey purists/players love it because they all learned how to skate on the frozen waterways of Eastern Saskatchewan.

2) Contract and/or relocate 3-4 current franchises.  Phoenix, Tampa Bay, Miami, Nashville should become Winnepeg, Quebec, Hamilton, and Hartford (I live in CT so I would love nothing more than a return of “The Whale”).

3) Partner with HBO for a 24/7 style behind the scenes documentary on the 2011 playoffs.  The “24/7: Road to the Winter Classic” was exceptional television.  It was able to humanize the sport and its players better than any previous interview or retrospective.  I especially liked the scene in the series finale where Pittsburgh goalie Marc-Andre Fleury gave us his best Denis Lemieux impression.

Ultimately, television contracts drive professional sports and unless the NHL can alter its current deal (I heard somewhere that it may be expiring soon anyway) it could be sometime before the sport emerges as the Great Global Game once again.

view of the Consol Energy Center courtesy of @PDPHollie